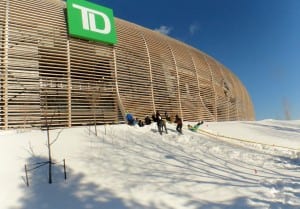 I can hear the walls creak from the quick drop in temperature (-28C) outside. I roll over and it’s almost time to get up. It is so warm in bed and I have to force myself to venture from underneath the covers. Today’s adventure will take us to Ottawa, Ontario. The plan is to rendezvous at a common area and carpool to save on parking costs. We are registered for the Polar Hero Race and have about a 2 hour drive before our heat at 1000 hrs.

The race director Gary Pillu chose to use the Lansdowne stadium, adjacent park and field (arena) to weave racers through a myriad of obstacles and permanent structures. Set up began one week prior and because this was the first time for this event at this venue, some minor logistics had to be worked out to accommodate the many obstacles (25+).

The line-ups for kit pick up were extremely long (sorted by last name initial) so we were thinking we weren’t going to make our 10:00 am heat. I popped over to the E-F line (nobody waiting) and the volunteer was kind enough to grab all our teams’ race kits and verify our identification so we would not miss our heat. We had been told that if we missed our heat it would mess up our results as there were no timing chips for this event.

According to Race Director Gary Pillu they had been expecting 1000 participants and they had advised racers to arrive at least one hour in advance of their start times. Each early registrant (first 100) received a ticket to obtain a Polar Hero t-shirt and could pick it up at a separate booth. T-shirts and toques could be purchased for an additional $15.00 in the main pavilion. Last year Polar Hero was held only in Montreal and Quebec City and numbers ranged around 450 per event. Having doubled in size this year, Gary feels confident that he will be able to continue this event for future years and is negotiating with various venues in both Provinces. 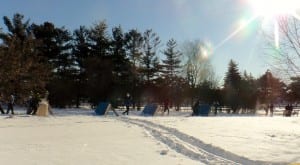 With our yellow wrist bands attached we darted over to the starting corral. We were released through grand wooden doors into the -21 degree weather and the chilly obstacles that awaited us. We were actually quite pleased that the sun was shining and the temperature had gone up almost 7 degrees. We looped out past the outdoor skating rink and began to weave our way through the perimeter of the park and a few climbing obstacles. With the addition of extra clothing it slowed down some of the ‘elites’ in the group; and caused a few bottlenecks and lineups along the course. We took advantage of these line ups to take photos and enjoy the view of skaters on the Rideau Canal.

We wove our way back into the stadium perimeter to be met with a variety of obstacles including: brick carrying hill climbs, hill slides, stair climbs with sand bags, javelin throw, reverse walls, cargo nets, ropes, stair descents with ruck sacks, ramp climbs, bucket carries, crawls, burpees, push ups and most railings we climbed over to a drop below. Overall there were 25 obstacles throughout the 5K course. Some obstacles were quite slippery and a few participants had to get medical attention from slips and falls. For one obstacle you had to be at least 5’ tall as you extended horizontally between two railings and inched your way for 20’ feet. Any obstacles not achieved resulted in a Burpee or Jumping Jack penalty.

At the water station at the top of the tower climb, they had participants memorize a sequence of words and numbers. We are still uncertain how this activity was verified during the event as nobody inquired later for us to repeat it? When I spoke with Gary he said that this is added to keep the mind active. Some events ask for it at the end while others may not, “it’s always a surprise” he noted during our interview. 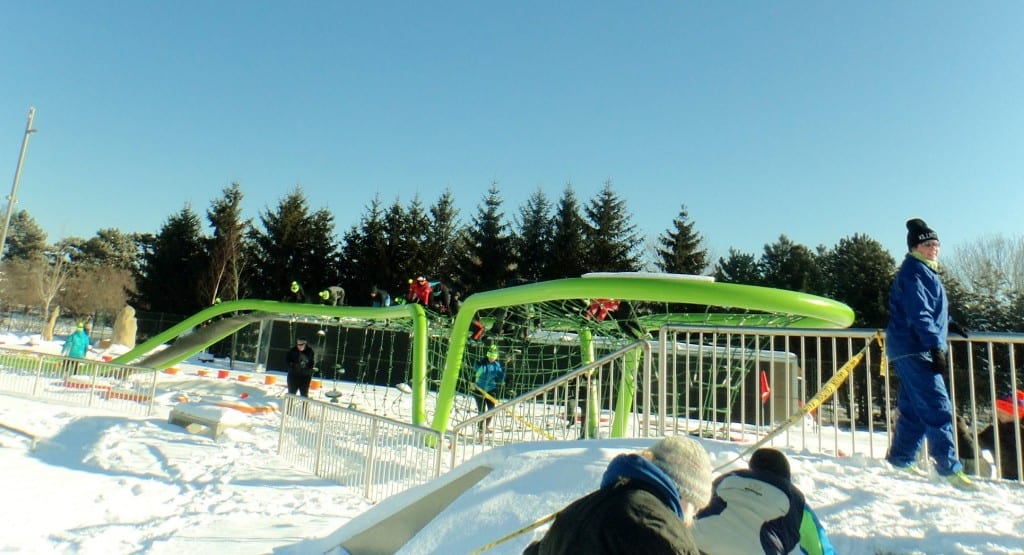 The route was well marked with caution tape and at only a few points did racers get a bit confused and have to double back to climb yet another set of stairs. Music was audible once you approached the pavilion and volunteers did their best to motivate you during each challenge. One of the local newspapers had a prime location at the bottom of the large ‘magic carpet’ ride where racers descending on blue plastic carpets ‘became kids again’ squealing with glee as they swooshed down the slick slope.

One of the downsides to racing in the extreme cold is that our camera froze about 1/3 of the way through the course, so pictures were limited for this event. We did manage to get a few photos before losing all battery power however we really missed having the opportunity to see pro photos posted online after the event. A few photos have been posted through Facebook.

When we descended the final stairway from the stadium we looped back into the rear of the pavilion to the three final obstacles: the rope climb, the Platinum Rig (cargo net/rope/loop) and the reverse wall. This is the spectator area and where Polar Hero finishers’ received their coveted medal. There was some confusion at the finish line as volunteers called out a number and then wrote in marker on your wrist band; we presumed this was our finish time? We are still uncertain how timing was calculated as our time was way off compared to our Garmin and some racers names were completely omitted from the timing summary. 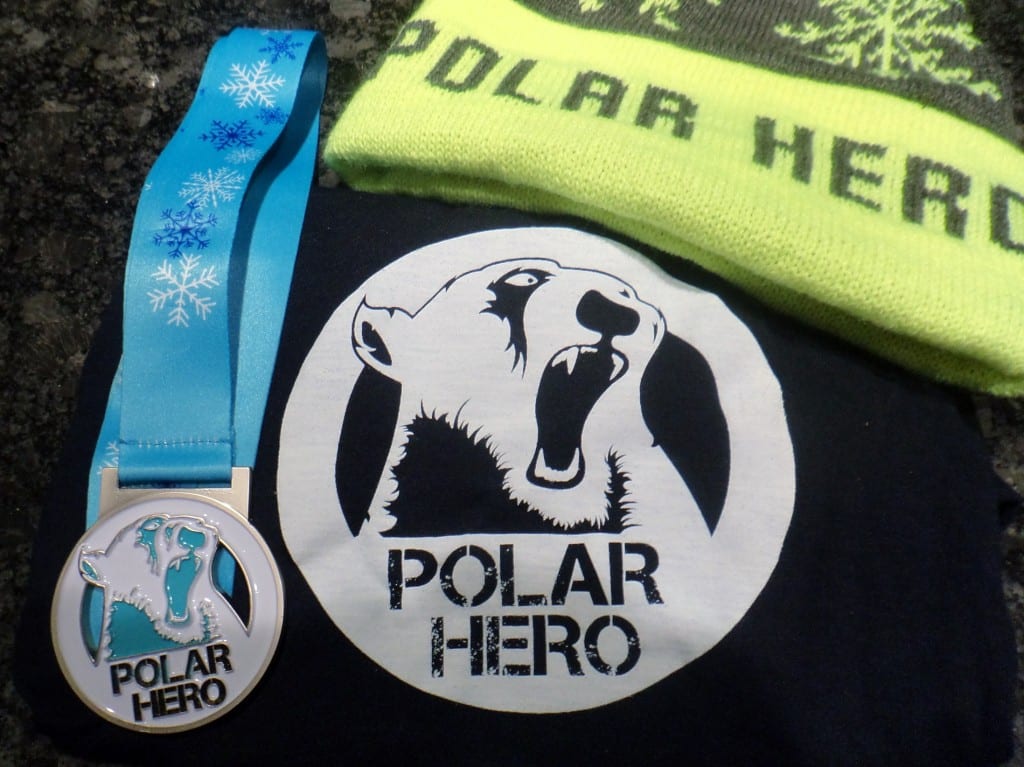 This race had trophies for top three -male and female competitors. The medals received by all finishers were very nice and many participants commented on how nice the t-shirt material was. The toques were a nice addition and added some much needed warmth and colour along the snowy course.

35 volunteers helped out at this event, and there were, what appeared to be medics, along the course who attended to those that had fallen or injured themselves. More volunteers could have been used to help racers over the more difficult obstacles and to warn them of potentially hazardous areas of ice and snow.

One area for improvement would be larger signage as many out-of-towners were scrambling to find the main building from the parking area. Another suggestion would be to have water dispensed in cups as racers approach to reduce waste; many of the bottles were frozen so we could not drink from them during the race and they were difficult to carry with mittens/gloves.

This was a fun and creative event despite the cold. It was surprisingly more difficult than anticipated and some of the reverse walls and rope climbs were quite challenging.

Thank you to brothers Gary and Kevin and the volunteers for putting on a fun event and spending a week in -25 degree weather getting it all ready. See you next year!