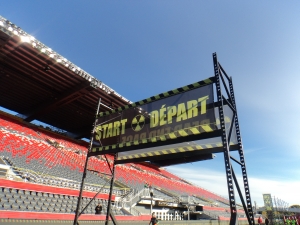 Today was our first stadium race at Dead End Race and our last OCR of the season, and we were not disappointed. The event was held at the TD Centre Stadium is located near Ottawa, Ontario. It was a great indoor/outdoor venue for this 25 obstacle event.

Racers were told to arrive at least 1.5 hours before their event via email and on social media sites. There were no annoying backups for race kit pick up, and the volunteers were quick and efficient. We 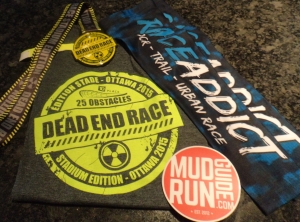 were told to head towards the vendor village to grab our included t-shirt, with the traditional Dead End race logo, attach our timing chip, and then make our way over to the starting area to see the Elite Race start at 0900hrs.

We were familiar with the location as it was also the site for the Polar Hero last winter. We were pleased to see that we could use Gate 2 and enter directly into the building with access to indoor washrooms and warm areas to change.

With our yellow wristbands attached we lined up for the start of our heat. We had arrived early, so we were able to see the beginning of the male and female Elite heats and get a feel for the course beforehand. Anthony, the MC, kept racers motivated and the music was heard throughout the entire event. A drone flew overhead, and the JumboTron kept us visually stimulated while we waited.

One of the great ideas at this event was to have participants line up in smaller groups to be set free to tackle the course. This kept the line moving quickly every 2 minutes

releasing a new group of racers and the time to launch felt like seconds. We had a group returning to meet us, but it was so quick we were gone before they even got back from the main building. A plus when you are keen to get going and see what lies ahead.

The water stations were well positioned with no lineups and ample water for everyone.

The route was well marked with caution and at no point were you ever questioning which way to go, it was clear and well laid out. We looped out and back and then proceeded to tackle each level of stairs with obstacles on every level and through each tunnel of the stadium.

The weather was perfect at 7 degrees with the bright sunshine heating racers up as they looped their way towards walls, crawls, 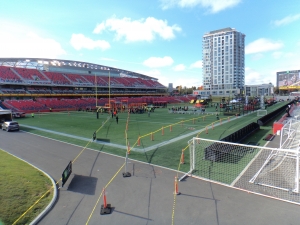 climbs, carries, lifts, and slides. One of the anticipated obstacles was the dreaded Platinum Rig; the orange monster loomed ahead mid-field, and as we wove our way through the turfed course you could see it growing ever bigger as we approached. Centre field was the only area where there were lineups for some of the most challenging obstacles like the side wall, where we had to wait for a new racer to figure out the slanted chain and grip approach and also at the rope climb and ½ pike wall at the finish line.

The written rules stated a racer could take two attempts to complete the obstacle but at some obstacles they were allowed only one try to reduce the lineups. For the Elite racers if they did not complete the obstacle their wristband was removed back to a recreational racing one (yellow) so they would not be considered for the Elite prizes. It was nice to see fellow Mudd Queens along the route, and we met up often supporting each other towards the finish line. Love my CMQ sisters!

After racers had attempted the final wall, they were rewarded with the most amazing Dead End Race Stadium Edition medal. It was massive and robust! We have to admit, this being our last OCR for the year was truly the icing on the cake! For any medal junkies out there, this one should go to the top of the list, it is gorgeous. Racers also walked away with a bright orange string backpack with water and a few samples in it.

We headed back into town to grab a bite to eat and tasted a few things as we left the venue like the amino acid (ProteinARabais) drink and the maple syrup with salt sampler –yum.

This race had trophies for top three -male and female competitors.

As mentioned earlier, there was one merchandise table where you can get great ‘Race Addict’ sleeves and merchandise, and a PA system was used to announce heats and pipe music throughout the stadium.

There were ample volunteers at every obstacle, and they were clearly marked in their traditional bright yellow DER t-shirts. All of them were extremely friendly and would help out racers as much as possible during the event.

We loved this event and found it well organized, entertaining and an excellent location. It was nice to see that some of our recommendations had been taken into consideration from previous events, and improved upon for this event; like having poured water for racers to reduce waste. We were uncertain how to register for another lap, and nobody asked us when we picked up our race kit, but there were a few racers we knew that did multiple laps –congrats to them. If you are planning on coming to Kingston, consider using the Queen’s University stadium for such an event, it would be a huge hit!

Thank you to brothers Gary and Kevin, and of course, Brian and Anthony and to all the volunteers for putting on an excellent event and bringing fab courses closer to home. See you next year!