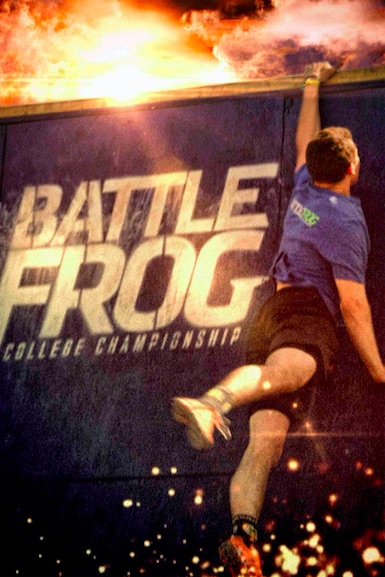 This morning news that BattleFrog Series had something big brewing. Early in the day, Mud Run Guide caught wind of a major restructuring of the organization. For a brief time this morning all the social media accounts seemed to have disappeared and all signs were showing that BattleFrog Series would join the OCR graveyard. This has quickly become the story of the day for the industry, as it stands now the twitter account, website, and Facebook page are still up and running. The Instagram page has been taken down.

Since the initial rumors hit the obstacle racing world Mud Run Guide has spoken with CEO Ramiro Ortiz as well as received an official statement from BattleFrog Series.

What the world saw this morning was the news from Kevin Jones, the Chief Marketing officer of BattleFrog post in the BattleFrog Ambassador page on Facebook this morning: 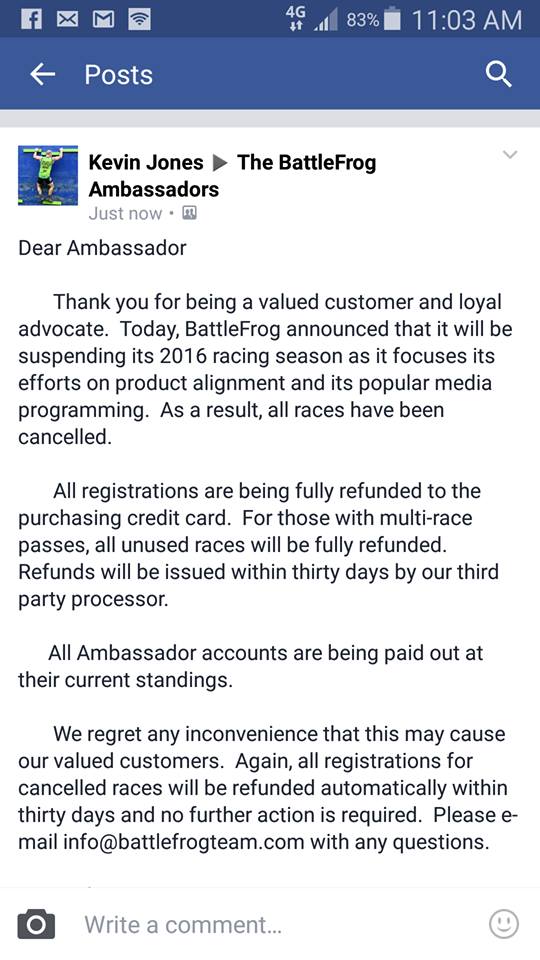 BattleFrog Restructures as a Media-Focused Company

BattleFrog, producer of both the BattleFrog College Championship and the BattleFrog League Championship, announced that it will restructure the company effective immediately to focus on its two highly successful media properties featuring the top Obstacle Course Racing athletes on both the collegiate and professional level.

“We are extremely proud of what we have accomplished at BattleFrog,” said CEO Ramiro Ortiz.  “In just under two years we premiered two hit television shows and developed the nation’s fastest growing race series.  In looking at our product we believe that we can best serve our millions of customers by focusing our efforts in our ‘Sprint OCR’ media programming.  It is some of the most exciting sports on television and this Summer has drawn nearly 10 million viewers to ESPN, while also being seen all over the globe.”

As part of the focus on the television properties, BattleFrog announced that it will suspend its longer format, 8-kilometer race series and is issuing full refunds for unused registrations.  Refunds will be processed within thirty days. Ortiz said: “Race cancellations happen from time to time and BattleFrog is refunding every cancelled registration.  The refunds are being processed as we speak.”

Going forward, BattleFrog is focused on expanding its popular “Sprint OCR” programming. This will include a full regular season for the BattleFrog League Championship, a global co-ed professional sports OCR league broadcast on ESPN, which delighted audiences as Team Norway came from behind to best San Diego in the Best of 3 Finals.  BattleFrog is also planning to extend the BattleFrog College Championship, its innovative and popular program that features a co-ed, single elimination tournament of OCR teams.  Twenty-four (24) major universities have competed in its first two seasons, with Army (West Point) repeating as champions.  Army will attempt to bring its third Trident Cup home to West Point in 2017.

BattleFrog College Championship Executive Producer Michael McAllister said viewers can expect even more intense competition and breathtaking moments from both series in 2017.  “We are thrilled by audience response to both series.  Our audience is young and family friendly, has high social interaction and our fans watch in binges.  We are investing in longer seasons, exciting set enhancements, new visual features and night-time broadcasts.  We have the two most exciting sports shows on television and BattleFrog is committed to approaching this as a global sports product for the benefit of television audiences, OCR fans and OCR athletes around the world.”

For those who were fans of the weekend races it seems that the those days are over. Time will tell how the new media-focused restructuing will affect the company and if we will see BattleFrog's programing emerge as an OCR leader in the media. For now it's time to cherish those medals earned and BFX's run and time on their iconic obstacles.

How do you feel about this move?

Will you miss BattleFrog?

Chime in on your opinions…