When I first heard about Zombie Run for Humanity, I was a bit skeptical. I had tried zombie races before and many of them lacked either the characters (volunteers, makeup, costumes) or the obstacles were less than challenging.  To my surprise, the Zombie Run for Humanity managed to do well in both categories.

The race was located at Karters’ Korner in Stittsville, Ontario. It was about a 1.5-hour drive for us and conveniently located near Ottawa, Ontario.   The venue is well laid out and normally offers mini-golf, paintball, go-karting, a driving range, indoor arcade, outdoor eating areas and canteen. 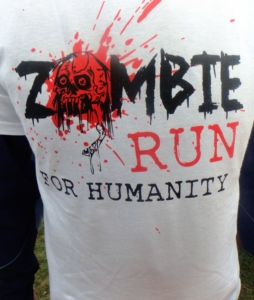 Upon arrival, we were greeted by a pleasant volunteer who directed us to onsite parking for a nominal fee of $5.00.  Some racers opted to park roadside to save the few bucks.  It was easily within walking distance so you could come and go to your car at will.  The race itself cost between $50-75.00 and you could opt to be a zombie to save $$ or raise $150.00 or more in donations to have your fee refunded.

Volunteers were ready to help racers get checked in and to get their race kits which consisted of a racing bib, flag belt, a blue wristband for those of legal drinking age, 3 flags, and pins. They were also clearly visible for answering any questions you had.We then did a quick survey of the start line area and headed back to the car to prepare for the race, it had gotten quite cool so we had to ensure we had long sleeves and leggings before heading out.

We chose to start with the first heat at 1045 a.m. and we eager to tackle the obstacles that we could see in the main racetrack area.    Zombies were roaming the start area and added to the apocalyptic atmosphere.  On Scene FX had done the makeup for the zombies and it was some of the best we had ever seen, from construction site injuries to the walking dead,  it was FANTASTIC how realistic the characters were that lurked throughout the course. 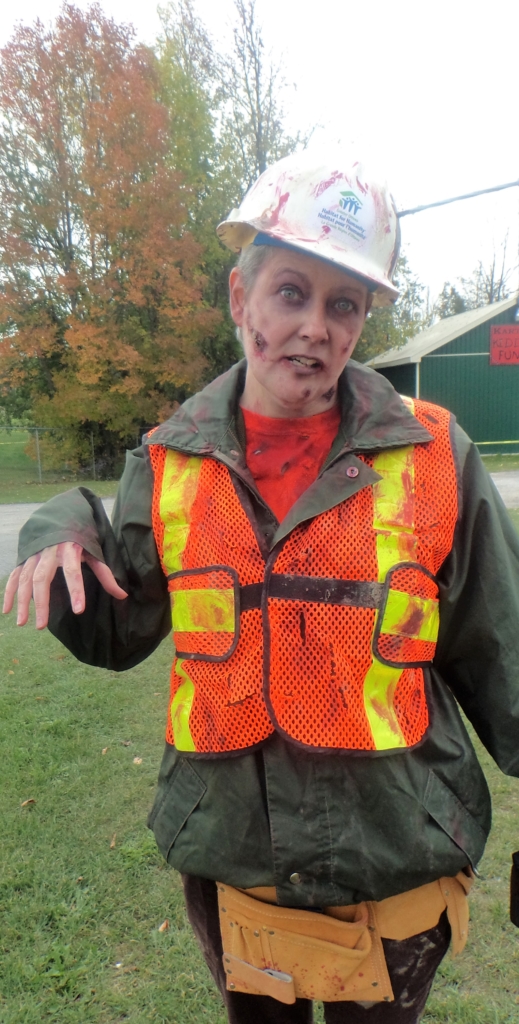 Back to the start line, we received a quick safety briefing and rules of engagement and then were sent off to tackle the 5K zombie-ridden obstacle course.  The goal was to come back with at least one flag to not be ‘infected’ and to have ‘survived’.

We raced out to the main racetrack area and began to climb, crawl and avoid zombies in various hunt zones. Some were concealed in dark buildings, others were hiding in trees or behind bushes and you could hear screams in the distance as you approached a suspected ‘hunt zone’.

There was a small lineup at the first large wall as newbies climbed with trepidation and lacked the confidence to go head strong up and over.

We then wove our way around the well laid out course, through wooded trails, over large mounds of carpeting (massive) and then crept our way through the paintball village that added to the eerie ‘desolate village’ feel.  Zombies were everywhere and some even took on personas like Batman, The Penguin, The Joker or combat soldiers that were heavily armed and guarding areas to support our survival towards the finish line.  We learned quickly to travel in packs and plan our journey through the infected areas.  It was true joy to laugh and screech as someone attacked you from the trees above or grabbed you while you crawled under tarp covered fences and onto the next challenge. We enjoyed the sideway walls that hovered over murky waters and the lily pad leaps that crossed the water features.  The climbs were great and well-made, and the darkened mazes added to the zombie rich quest.

We could not get over the amount of effort put into the details of the armed soldiers (in full combat with rifles) and how well marked the trails were so we rarely questioned which way to go.  We even took a few photos along the way with the various ‘characters’ truly enjoying the un-timed event. 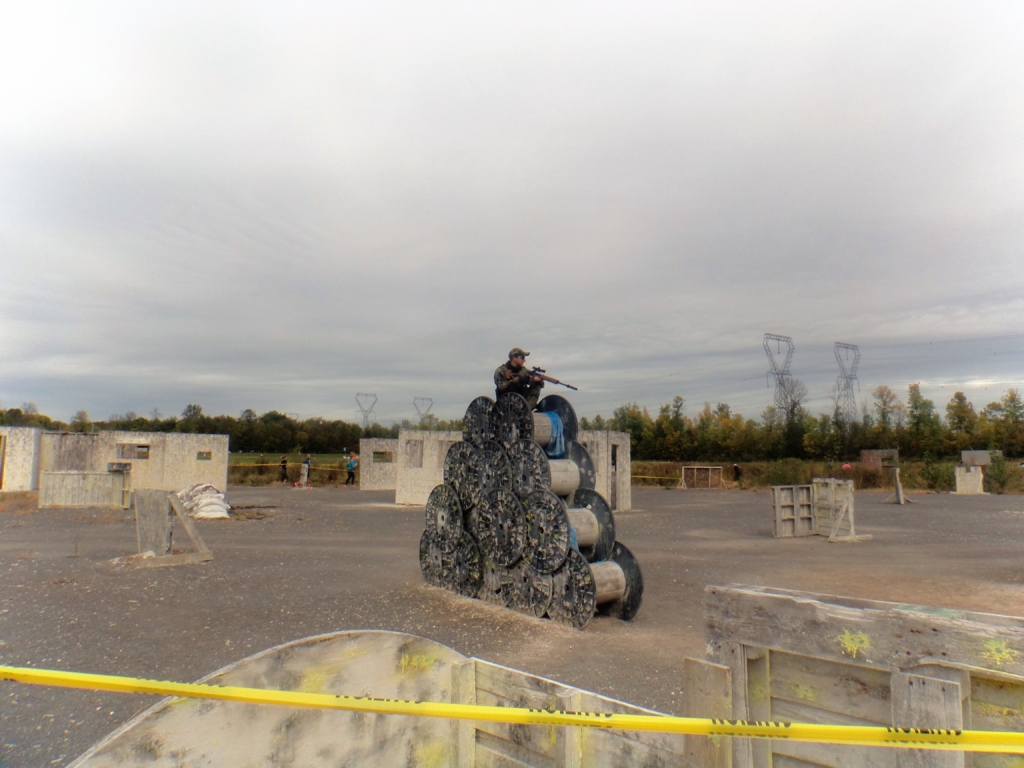 This was a spectator friendly event with ample areas to view the excitement at the start/finish lines, and live entertainment could be heard throughout the venue.  Medics were on site and there was a water station near the ½ way point. 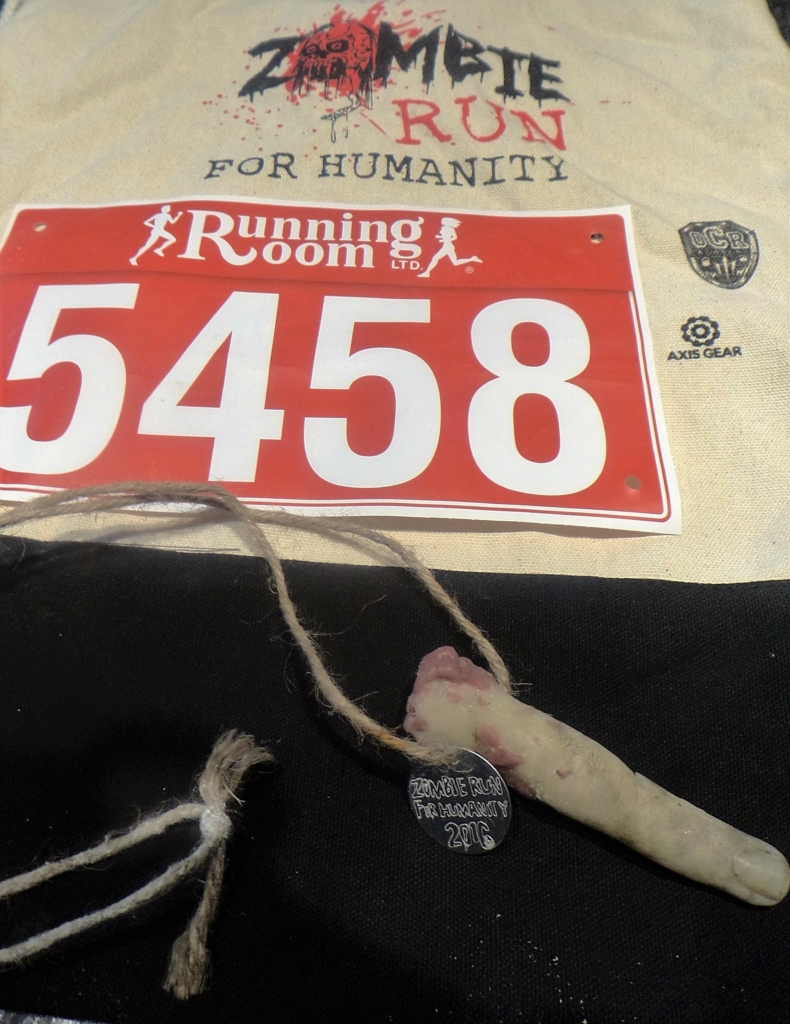 At the finish line, racers were split off to those that were ‘infected’ and those that were ‘survivors’ depending upon they had managed to retain a flag or two.  We had lost our flags early on as there were a few greedy zombies that were taking two flags at a time, but we did manage to get a few flags back along the course from unsuspecting zombies.

We chose to be ‘decontaminated’ and see what that entailed.  You entered a cordoned-off area and were doused with a ‘powdery substance’ (corn starch) from a suited up decontamination professional.  It was a good photo opportunity and added a fun touch to the finish line.

Each finisher received a canvas knapsack containing flyers, pamphlets, a water bottle or t-shirt from GoodLife Fitness, a granola bar and water.  The medal has to be one of the best ‘themed’ medals we have seen with a severed and dirty finger hanging from a piece of twine with a customized tag on  it.  We have been told that each year a new body part will be given, so we can

This is a family-friendly event, (racers must be 14+) and alcohol is served on the premises. Karters’ Korner has some fun ‘faceless’ signage that you can take photos with after the event and has indoor change rooms, washrooms, and a covered eating area for the BBQ that was offering great food for minimal cost.

Recommendations for racers: Wear gloves at this event for rough surfaced wood.

Suggestions for directors: Sell t-shirts, if not offered in race kits, we would have bought merchandise if it had been available i.e. hoodies, towels, or zombie themed merch. Have a physical challenge to recover a flag at various points along the course.

Thank you to the Ryan Ricci and Susan Vacheresse for a job WELL DONE and donating funds back to Habitat for Humanity!