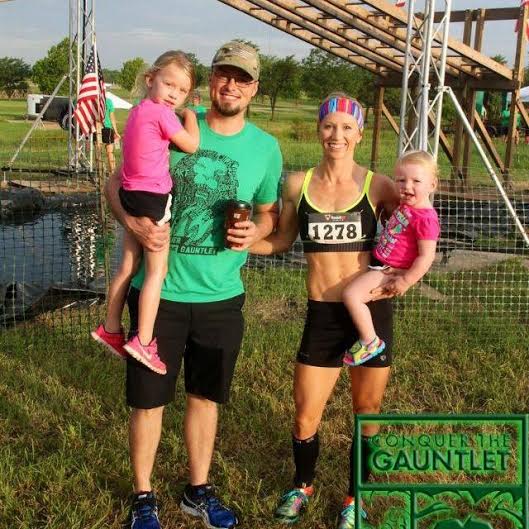 Each woman in this series is unique in their own way. For Randi, what drew me to her, was her athleticism. She is not only a woman that holds multiple podium finishes in OCR races across the board, but she was one of only 2 women in 2015 to keep their belt when finishing Conquer the Gauntlet (a mandatory obstacle completion OCR). She has her own personality and seems to be full of energy and drive.

Please tell us a bit about you:

I played sports in school – track, cross country, softball, gymnastics, basketball (my face caught more basketballs than my hands did though so we don’t need to discuss that sport). In college, I found myself lost without a coach and got pretty out of shape my freshman year. When I had to stop halfway up the stairs to my dorm room, I decided I need to do something. I was a lifeguard at the YMCA and my boss was a bodybuilder so I sort of followed her advice along with another trainer. It wasn’t long before I was hooked and loved the way I felt! I had struggled with body image issues and probably and eating disorder, but working out, running and OCR has made me appreciate what my body can do rather that what it looks like.

What is your proudest achievement to date in your sport?

Conquer the Gauntlet is a mandatory obstacle completion OCR and they use belts to determine who has completed all obstacles. Until 2015, no women had finished with a belt. I was the first woman to finish with mine as well as the first to complete the Stairway to Heaven. Out of all of the races in 2015, only two women kept their belts. My teammate, Nikki Call was the other!

When someone says to you Obstacle Race or Obstacle Course race, what does this bring to mind for you?

I have a LOT of build-up energy and I’m a pretty reserved, calm, introverted (at times) person on the outside. But sometimes I just feel like I could literally explode. Training and racing gives me an outlet to release all of that tension and energy in a healthy method. It’s the one thing I have where I can just let it all go. And no one cares if you get sweaty, muddy or make funny faces and noises ☺

We all have our strengths and our own personal challenges. Please tell us about one strength that speaks to who you are, and one challenge that you are working to overcome (can be professional or personal)

My strength is probably developed out of my biggest challenge, which is training alone. I’m from a town of about 2500 people. It’s not that common to see people out running, let alone pushing two girls in a stroller, stopping for burpees, doing pull-ups at the park or running around through pastures. My parents and husband are runners so I have them for support, but we never train together.  Sometimes I think it would be easier to have a group of people to motivate me, but that’s where I’ve developed my strength. I’ve trained myself to maintain a high level of motivation and it has become engrained in my soul.

If you could be any flavor of ice cream what would it be and why?

Did you say ice cream? That’s a tough one because I love them all, but probably Rocky Road because I like all the surprises. Will you get a bite of chocolate? Nuts? Marshmallows? 😉

What was your first competitive event? Tell us about that


My first running event outside of school sports was 5K about 45 minutes away. I don’t really know why I wanted to do it so bad, but I made my husband go with me for support. It was raining so we almost turned around. I wore some old Nike’s and cotton tank top and by the time I was finished, it was hanging to about my knees because it was so full of water! It took me almost 30 minutes and I didn’t even place in my age group. However; I was so proud of my participant medal that I wore it all weekend! That was when I began really paying attention to my times and worked on improving them.

Is there an event/competition that you would never do?

Probably any kind of survival challenge. I would be terrible if I had to go several weeks without clothes, food or shelter! I can make it about five hours without food and then I turn into a monster! I would probably end up eating one of the camera men or my teammates if I were forced to find my own food!

What quote inspires you?


When I race I’m always telling myself “I didn’t come this far, just to come this far”. It takes a LOT of work outside of a race to prepare. We get up extremely early when sleeping feels better, make the time for it, and dedicate hours and hours to get ready for a race. Sometimes the travel alone lasts longer than the actual competition. If we don’t give it our all or quit on an obstacle after a few fails, we waste all of that time we spent training for it. If I’m going to be at a race, every ounce of what I have in me will to go that course.

What is one little-known fact about you? for example a cute nick name.

I really don’t have a nickname now, but when I was a kid my parents always called me Ricochet Randi. I was (and still am) one of those kids that would never sit still. Running, jumping, climbing on anything I could find.

I know we all have our own training plans/schedules/goals – tell us a bit about yours:

Honestly, my goal is to have fun! I told myself that if I ever felt so pressured to do well at a race that it became a “chore” more than something I enjoy, then it’s time to take a step back. I had a couple of races that didn’t go my way last year and I was miserable to be around until the next race where I did better. Of course, I have goals to progress. I had PRs on my 5K and Half marathon in 2016 so I want to improve on those some more. And of course, who wouldn’t want another Gauntlet Glove?? I have an odd number of them so I need one more to complete another set

Do you feel like you are a “minor” celebrity with what you have accomplished? if yes does that feel weird to you at all?

I really don’t. I’m so ordinary, but it is a strange feeling when random people come up to me after a race and say they know all about me from previous races!

Please name one guilty pleasure you have?


Anything sweet, but particularly PUMPKIN PIE! I don’t have it very often, but when I do, I definitely indulge! I have a big family with multiple gatherings during the holidays. One Thanksgiving, I ate 24 pieces of pie. I should be ashamed, but it was when I was young and didn’t know what calories would do to my body! 😉

If someone wants to reach out to you on social media, how do they find you?

About the Author: Charity Fick

Charity Fick is a distance runner who currently resides in beautiful Surrey BC Canada with her husband and partner in Mud Ryan, and her daughter Sierra and step daughters Brandi and Samantha.Although running was and still is her first passion, she is an avid OCR enthusiast. Charity has participated in a number of different road / trail and family oriented runs and OCRS within the past few years and is always up for a new challenge. She has successfully completed multiple runs ranging in distance from the fast 5km up to the 42 km marathon distance. Charity Fick is an active participant in the online running and OCR communities, and continues to write articles, race reviews, and human interest pieces exclusively for Mud Run Guide.com. She is currently a member of several communities including the Mud Run Crew, the Canadian Mudd Queens, her local OCR training group – VanCity OCR, and runs frequently with the We Run Surrey Crew. Charity is also passionate about talking to others within the OCR community and sharing their stories.Her interest in OCR was born after reading Brett Stewart’s book – Ultimate Obstacle Race Training, and after completing her first solo Spartan race, she was hooked.In her spare time, Charity enjoys writing, blogging, digital photography, running, working out and Obstacle Course racing. As a proud wife and mother, it is her hopes that others will hear her stores about the mud, barbed wire, friendships, bruises and fire and be inspired to make a change in their lives by trying something new. You can often hear Charity on course laughing, and making jokes about how much she loves getting dirty and how OCR is good for the Soul.