At the beginning of Episode One, we get the first glance of Camp Grit. The camp is a resort looking compound nestled on a lake in Coastal Georgia. The Cadre is enjoying breakfast and discussing with John Cena what their leadership approach will be. At this time the competitors start to make their entrance one by one.

The first member of the new season is Richard, who boasts his non-athleticism. He is followed by an enthusiastic Chris. Hannah makes her entrance with a bug spray shower and her moto “When the going gets tough, I quit.” Next, we meet George Foreman IV, Gigi “The Princess is here!” and Natalie; a mother who is about to be an empty-nester. We are introduced to Herman, who uses a whistle to summon a hawk.  Finally, we meet Shermon, who introduces himself with some profanity. (The competitors not mentioned will be introduced to us as the episode and series continues)

The cast enjoys some drinks and socializes on their deck as they wait for the Cadre to great them. Hannah freaks out over a bug in her shirt and questions her reasoning for being there. The Cadre com and competitors take this time to get to know each other. During this meet and great, Melanie tells Cadre Burk of a hard break up that is her motivation to find her grit. George Foreman informs viewers that he is indeed the son of the famous boxer. We get a glimpse into Chris’ bullied past and learn why he has come to Camp Grit. At the end of happy hour Cadre Grady uses a kitchen knife to remove Gigi’s giant fake nails.

John Cena, the Competitors, and Cadre meet around a fire where they are given a breakdown of what to expect. Cena tells the competitors that not only will one of them go home before the team challenges begin, but that there are only 16 beds for the 17 of them to sleep in. Hannah makes a ballsy move and swims across the lake to procure herself a bed while the rest of the competitors run around the lake. Shermon lies to Will about being the first to a bed. Will doesn’t protest and ends up sleeping on the floor. Carla relates to Will having to sleep on the floor by sharing a story from her past. Alison welcomes Herman’s blessing of the shared space with sage, as she suffers from extreme anxiety and wishes to “expel her demons”. 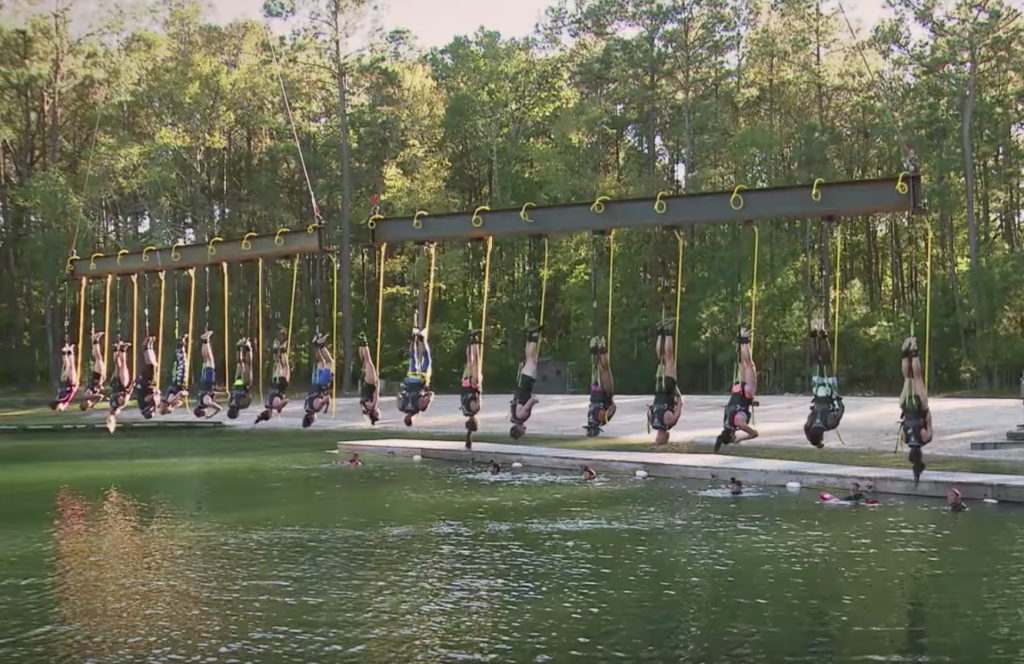 The Competitors are put to their first challenge that takes place over the lake. Herman is trying to comfort Alison’s fear of water as the rest of the competitors search for their swimwear. For this challenge the competitors are suspended upside down by a giant crane and repeatedly dunked in to the lake. This challenge is not only an opportunity for the Cadre to evaluate the competitors, but also an elimination challenge.  The first person to give up will go home. The Dunk Challenge last for 30 minutes. Many of the women are shivering and crying, all of them feeling the effects of the blood rushing to their head.  The Cadre expect that someone will eventually quit, but no one does. With John Cena proclaiming that he has “seen enough” the challenge is called. This leaves us with the competitor count still at 17.

Back at Camp Grit, the competitors continue to feel each out.  Shermon exhibits his cockiness and causes conflict with Alison and Scarlett. The Cadre return to check on the competitors. Shermon admist that he tricked Will in to sleeping on the floor.  John Cena explains that the fact no one quit during the challenge has made the team selection difficult for the Cadre. Burk is discussing with the leaders his interests in Shermon as he sees him as a challenge. Back on the competitor deck, Shermon and Alison resolve their issues for the sake of moving forward. However, Shermon is not genuine in his apology.

Team Selection Day. The 17 competitors are situated on a beach where they are told to hold a beach ball over their head and spin. The competitors do as told. Holding the ball over their head and spinning themselves in a circle.  This is a comedic moment as the command needed a bit more explanation. The Competitors are reset and begin to spin the ball over their head with their fingertips. The first competitor chosen is George Foreman by Grady’s Team Green. Burk is not happy with this decision. Burk takes second pick and chooses Melanie to be his first teammate on Team Blue. Riki chooses Gill for Team Yellow, and Alison is chosen by Chloe for Team Red. Carla is wanted by all 4 Cadre and is given the choice of which leader she would rather. She chooses Team Yellow (Riki). Janessa joins Team Red, Will on Team Blue. Grady asks who will wrestle an alligator for him and Hermon jumps at the opportunity, joining  Team Green. Burk chooses Hannah for Team Blue in an advantageous move. Grady picks Michael, Riki choose Richard, and Chloe steps up and takes Shermon. Scarlett completes the Yellow team, Natalie completes Red Team and Gigi is chosen as the last competitor for Team Green.  Chris and Heather are the remaining two competitors. Burk chooses Chris to complete Team Blue. Heather is the first competitor eliminated from American Grit 2. She parts with a positive attitude stating that there is a reason for this decision.

The new teams are congratulated by Cena and sent on their way.