Welcome to OCR News Weekly. Today is Friday, June 9, 2017. I am Margaret Schlachter and thanks for joining the live broadcast. This week the top news stories come from Spartan Race, OCR EC 2017, and the Ninja World.

We Start with Spartan Race –

Spartan Race made their second stop on the U.S. Championship Tour last weekend in Monterey California for the Golden State Classic. Once again Spartan Race live streamed the entire race offering OCR fans a chance to watch all the action from home.

However, the real excitement came in the women’s race. Nicole Mericle and Lindsay Webster made for an exciting finish. The two battled obstacle after obstacle for the last section of the race.

In the end, it was Mericle who took her first U.S. Championship Tour win over Webster. Alyssa Hawley took third place beating out Rea Kolbl on the last rig. Becca Clifford rounded out the top 5 for women.

Last weekend also marked the OCR EC 2017. OCR EC is one of the European Championship races. The race was held in Germany and featured many obstacles from the popular European series Strong Viking from the Netherlands.

All eyes were on Jessie Graff this week when she broke another record this week with her successful run on Stage Two of USA vs. the World special on NBC. Graff nearly broke the internet last year with her successful runs. The Professional stuntwoman was one of the top trending items on the internet all week. You can find her run on multiple website, social media accounts (including ours), and on Youtube in case you missed it.
American Ninja Warrior’s new regular season begins June 12 on NBC.

Speaking of Television. Next marks the beginning of the latest American Ninja Warrior season as well as Season two of Spartan: Ultimate Team Challenge. Both shows premiere on back to back on June 12. The obstacle fun starts at 8pm eastern time. Our social media guru Bonnie Wilson as always will be live tweeting along with Ninja Warrior each week. Our contributor Larry Caldwell will be offering insight and recaps fro Spartan: Ultimate Team Challenge this year. Look for his articles each week after the episodes.

If that is not enough obstacle loving television for you, June 11 the popular FOX show – American Grit – returns at 9pm. Last season featured several obstacle racing athletes. From previews, it appears this season is a little different. Season 1 competitor and obstacle racer Haze will be providing recaps after each episode on Mud Run Guide. Be on the lookout for her insider analysis each week.

We move over to Race Results from last weekend. In addition to Spartan Race Monterey and the OCR EC last weekend numerous obstacle races dotted the globe. We highlight a few those races this week.

We start with North America and Savage Race in Ohio. 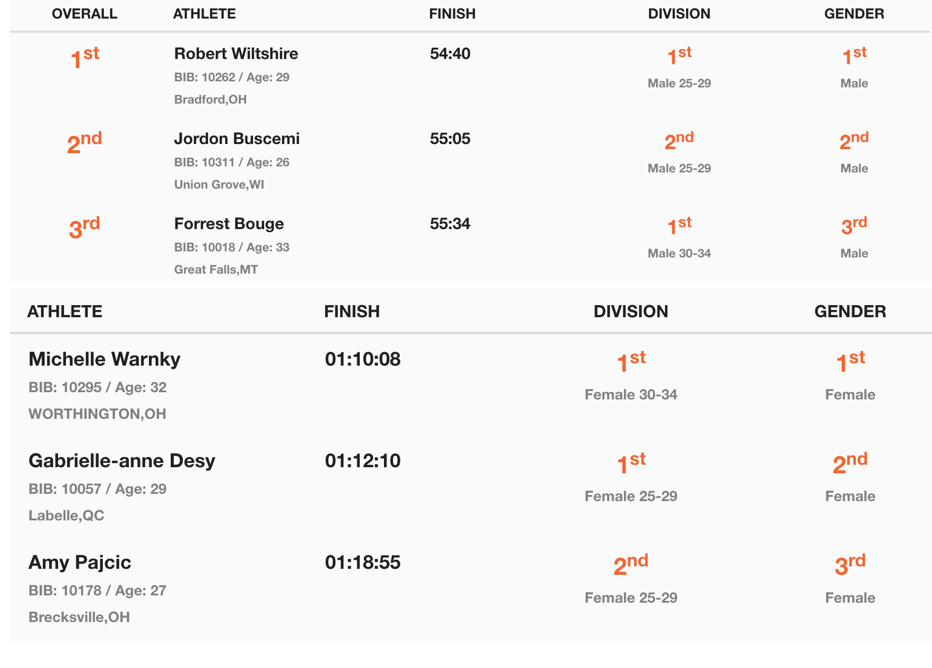 Next we move over to Conquer the Gauntlet…

Moving outside of North America and over to Europe.

Toughest made a stop over the weekend in Stockhom continuing their 2017 tour. With Jon Albon off running and winning a Skye series trail race it opened the door on the men’s race. The top results are:

As we look ahead to this weekend. We have Tough Mudder in Virginia,  California and Vancouver, Canada. Spartan Race is in Illinois, Texas at AT&T Stadium and Tuxedo, New York. Terrain Race is in Atlanta. Up in Canada Dead End Race takes place in Montreal, Quebec.

Moving over to Europe: Airfield Anarchy takes place in Nottinghamshire, The Mudder Dog Dash is in Essex, and finally Gelt Gladiator is in Cumbria.

Downunder in Australia True Grit and True Grit Enduro 24 Hour races are taking place outside of Sydney, Australia. Finally,  over in Japan the Fuji World Famous Mud Run takes place. For the full list of races happening this weekend be sure t check out our full race calendar at mudrunguide.com.

That’s all for this week in OCR and OCR News Weekly powered by Mud Run Guide. Join us next week for all the news and results from around the industry. If you missed the live broadcast you can find this episode on all your favorite podcast players and on YouTube.

This is Margaret Schlachter signing off for this week. Best of luck to all those racing and have a fun and muddy weekend!