Tough Mudder started off the 2018 season in New Orleans this past weekend with some visible changes. The biggest difference between the 2017 and the 2018 season was the five mile, two loop course format instead of one ten mile loop for anyone doing the Tough Mudder Full. On paper, it didn’t seem like that big of a difference, but on the course, it became clear that it had a very different feeling.

I tried to stay positive about it and for about the first half of the first loop, I didn’t have any complaints. Then I started to see issues. Minor things really, but compared to the previous year, it wasn’t the same experience. 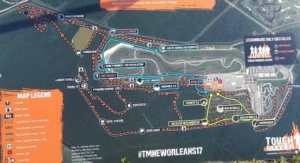 My least favorite part of the 2018 race was doing the same obstacles a second time. Crawling through the mud under barb wire is my kind of Saturday morning activity, but it’s not as much fun a second time around. I felt ripped off, especially since by the second time around the crowds had increased.

Other drawbacks included a feeling like I was about the get stampeded by fresh racers a mile into the course. Not to mention running the same stretches through the woods a second time. I love running through the woods, but half of the fun of running off roads is seeing new views and terrain, not counting down the turns until the next obstacle.

I ran in the 8:30-time slot, one of the first waves after the elite/Tougher Mudder wave. About a mile in, I started getting passed by the competitive racers and at times I felt like I was in their way on the course and at obstacles.

A very small sample size of feedback from some of the people that ran in the Tougher Mudder was that it wasn’t a big deal, there was a little bit of a backup at some of the obstacles the second time around, but for the most part it wasn’t an issue. A friend of mine even said that he liked the second time around because it allowed himself to pace himself because he knew what to expect.

Talking to other open athletes that had run Tough Mudder Full’s in the previous years feel mostly into the negative realm. Again a small sample size.

Starting line emcee Sean Corvelle mentioned the new two loops format in his motivation speech. He said something along the lines of people don’t always like change. I don’t mind change, but to me, it seems like this change isn’t benefiting the racers. I think it's a change designed to make it easier to build a course, say there’s more obstacles and save a few bucks.

I was disappointed. Don’t get me wrong. I’m proud to wear my Tough Mudder finisher shirt to the gym, I enjoyed the obstacles, I liked the course, I just wish that I didn’t have to do it twice. At this point, I’ll probably run another Tough Mudder Full, but I’d say it’s not guaranteed. After my first Tough Mudder last year, I couldn’t wait to sign up for my next one. I hope they go back to the old course format.

I’d love to hear what you think.

0shares
Disclaimer: The viewpoints expressed by the authors do not necessarily reflect the opinions, viewpoints and official policies of Mud Run Guide LLC, or their staff. The comments posted on this Website are solely the opinions of the posters.
By Mike Crimmins|2018-03-19T10:35:07-04:00March 19th, 2018|Op-Ed|19 Comments

About the Author: Mike Crimmins

Mike Crimmins enjoys craft beer and New Orleans restaurants, which is why he discovered Obstacle Course racing when he was looking to get back into shape in 2013. Since then he's cut back on the craft beer and raced in just about every OCR in the gulf south. He works out out with his active four year old and looks forward to racing with him in the near future. He is also a retired coffee blogger and active digital marketing pro on week days.