After coming off a great year in 2017 Epic Series decided to make their way into a new market. In the past, many of their events could be found in the Los Angeles and San Diego areas. Having participated in 10 Epic Series races in the past I was very interested to see what this new location would offer. 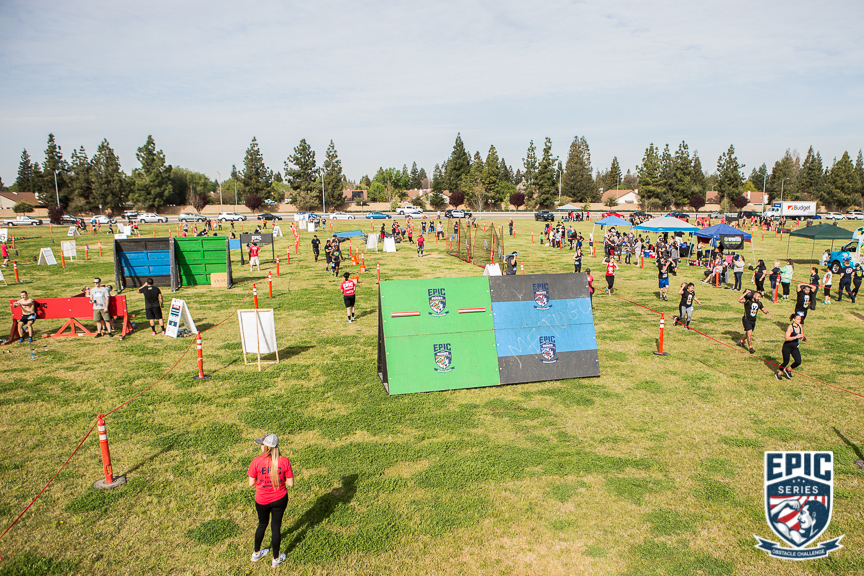 The location was at a very big park with lots of grass and free parking. I was glad to see that they had around 400-500 people signed up prior to race day. I do have to say their registration/big pickup system has evolved into a very simple process. I was signed up for the competitive/elite waves and they offered a dedicated station for us to check in there. Once again they did a wonderful job at setting up the festival area allowing many vendors the space they needed. Everything was within walking no shuttles were needed.

The course was being set up on Friday by all the volunteers. We had the chance to see the course layout and talk to a few of the organizers that we know to have them share with us for our article if there were any major changes for Fresno that was different from past event. Nothing was changed and we were going to see many of the same obstacles that we had in the past. I was excited about that as I have been training hard for this to possibly be my final competitive race. 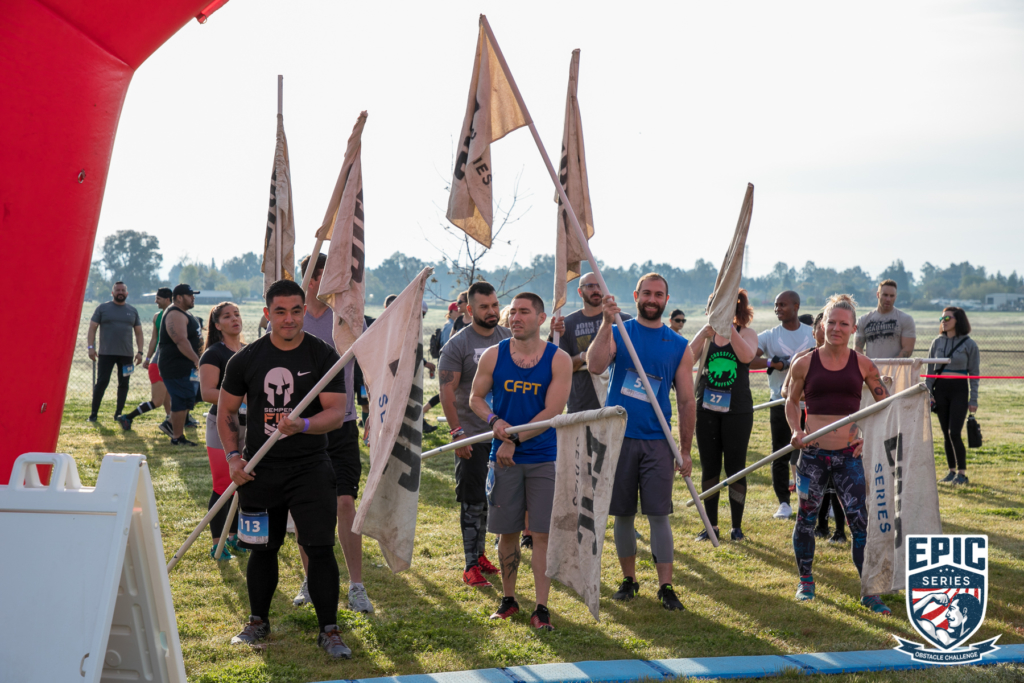 Things got kicked off with the EPIC course with the competitive wave going first. As planned they released the first wave at 8:00 am right on time. Since the beginning of this company, they have always had the athletes carry their signature flag for the first lap around the course. After dropping the flag on the first lap the men found their way to all the (black) advanced-level obstacles and women had to complete the intermediate-level obstacles at each station that offered those choices. Many of the familiar challenges were on course today that included the Atlas Stone Shrugs (M – 95# / W – 65#), Burpee Box Jumps, Overhead Squats, Balance beam, then it was off to run a lap with a 25# bag. 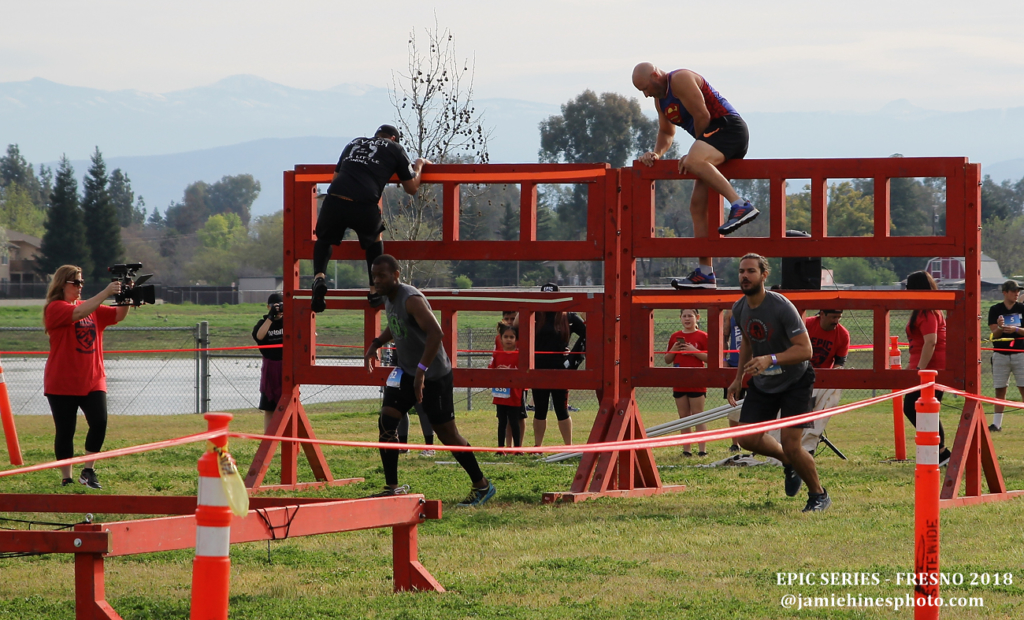 If you have not run one of their events before after you complete each lane of challenges the athletes are required to run a lap carrying a flag, jerry cans, slosh pipe, keg barrel or just sprinting a lap on your own. Today I was pacing myself a bit more as I knew in the past I came out a bit fast. Knowing the course really helps and where I can gain time and pass other athletes. At 47 years of age, I run with all the other competitive males but they do have a master's division and in Fresno, that was no different. As you keep moving around the course you have to get over many walls varying in size and height. What has hurt me in the past was the 3-minute wall sit station. Here you need to hold a sand timer with your arms out straight with your body at a 90-degree angle. If you need to stop you must turn your timer sideways until you get back into position. At the two previous races, this obstacle kicked my butt for some reason having to turn my timer a few times. Not today I worked hard on that these past few months and making it through the whole time without turning it was a huge victory for me.

After that challenge, they had an inverted wall to get over and then the second set of 30″ box jump burpees. Can you say quad burn! Epic did a great job of placing those jumps right after a 3 min wall sit. Quickly knocking those off I got down started the 3 minute low planks. These went very smoothly as usual for me. In the back of my mind, I knew I had passed another master's guy in my heat after running most of the water-filled Jerry Can carry. But I had my eyes set on the really fast and younger guy in my heat that was tearing it up. Next, we had a sprint lap which he was about a half lap ahead of me. As I rounded the corner I saw one of my favorite obstacles that are designed for my strength and stamina. They are called the Lumberjacks. Grab the very heavy metal beam and flip it end-over-end for 15 times. Blowing past these, as usual, I now took the lead over my smaller, faster challenger. This was great motivation for me and another reason I love EPIC. They offer challenges that fit smaller and faster guys but also ones for us bigger stronger guys. Blasting over the next two walls I was onto a small rope climb for two times up and down. With another lap in front of me, I knew it was another I could crush. Grabbing the 40lb slosh-pipe I quickly ran that whole lap. With only a few obstacles and challenges left I knew my time was good. Maybe even good enough to get me to the podium for the Master's division.

Coming down the last lane you find yourself with Keg Barrel hoist, the archery shot, and another signature tough wall called Barnaby's Challenge. For me, the 60-70lb Keg barrel hoist is a breeze with two times up and down. Moving onto the Archery shot you need to hit the target in the center before moving on. Today was my lucky day hitting my target in the first shot. Now I need to get over this wall that is about 20 feet high with only rock climbing holds for you to use. After jumping down the other side I quickly loaded the 80lb Keg barbell onto my shoulders for my final lap. At this point, I had a very good time going and I wanted to end this race pushing hard. Running most of the lap with it on my back after dropping the barrel I then sprinted across the finish line with a time of 33:54 thus earning me a second place finish for the Master's division. 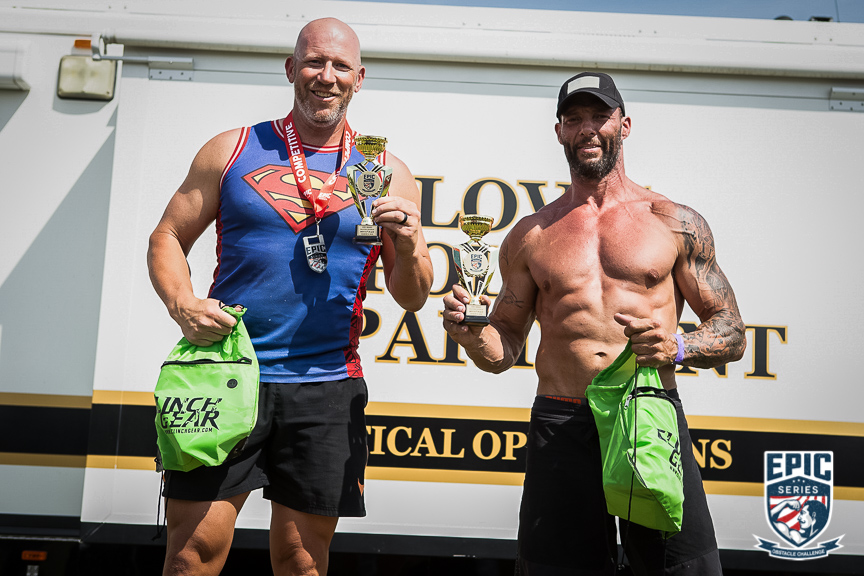 After just finishing my competitive course challenge I need to take some time to replenish my body before moving onto my next event the Elite Endurance course. I personally set a time to start of 10:23 am giving myself a little bit of rest but not too much. You want to keep your body warm and loose so that you don't get into that relaxation mode and your body thinks it's time to start recovery. Today at the Fresno event they did make a few changes. First of them being lowering the weights for both courses. Today I choose the endurance course. They did put a spin on things and decided to add more reps and also 5 burpees between each obstacle. Secondly, they took away the 15-minute time cap that you would see on previous events in other cities. I was told this being a new market they wanted to just introduce the event and allow as many people as possible to experience the challenges Epic offers.

On the elite course, you would find 9 challenges that would test not only your strength but also your endurance. You are assigned a judge and they follow you through the course. The judge is responsible for counting your reps out loud or letting you know if you had a missed rep. Today was kind of neat we started our course off by pulling an SUV police cruiser for about a 30-yard distance. Once that was done you got out of your harness and ran over to your lane to begin the rest of the obstacles. 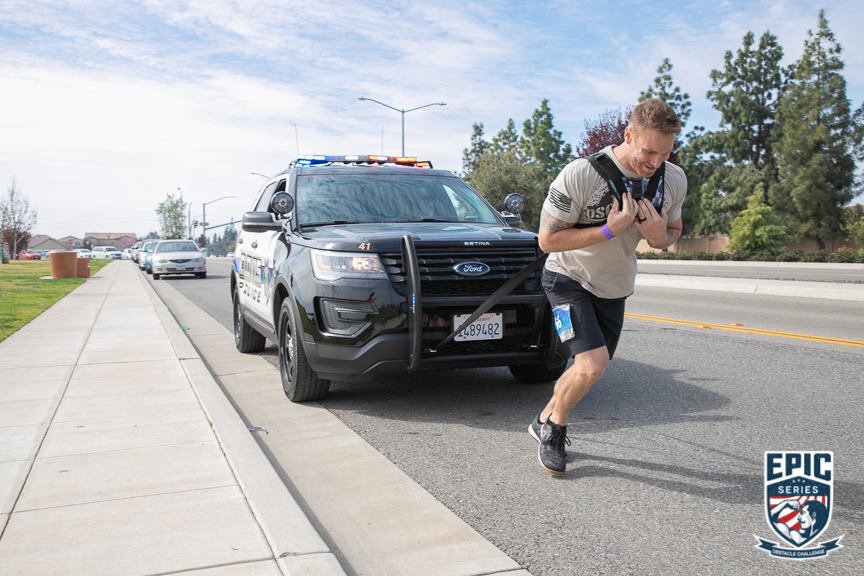 I ended up running the course in 16:00 giving me the 5th fastest time on a course. And with my combined time from the competitive course gave me an overall placement of 6th. I was a little disappointed to not make it on the podium for the combined times but that's okay there are some really great athletes there in Fresno this weekend.

I thought Epic did a really good job in putting this event together. I was very impressed with how everything ran very very smoothly at a new location for them. The only concern that I would mention was the timing issues they had with trying to determine who their overall winners were for the three different categories of Podium winners they recognize. I'm not sure if there was just a communication error to the timing company but it was a little discouraging seeing the course being taken down before they even had the award ceremony. Many of the athletes that I already left including myself as we had to rush back to the airport to catch a flight.

They have there normal Podium ceremony Awards that they gave to the top athlete in both the men and women's category and everybody that does an epic race knows they are all chasing that Epic first place champion belt period along with that they're normal swag new black t-shirt which I really liked and a finisher medal on the competitive course. They offered 2nd and 3rd place trophies for the combined courses and also the Master's divisions.

I give this event 4.5/5 stars only taking off for the timing issues.

Have you done an EPIC Series?

Leave your own EPIC Series review and feedback...

About the Author: Jamie Hines

I'm an athlete that competes in OCR, Trail races along with other endurance and strength type competitions. I'm also a professional photographer & videographer with over 14yrs experience. We run, shoot, and write fitness and race reviews