This year, Gladiator Rock n' Run Race decided it was time to evolve with the future, so the company vocalized their intrigue in organizing a stadium run. Spartan was the first to introduce it in 2012, and now many of the leading obstacle course racing brands are becoming fascinated with the idea of racing in their favorite arenas and ballparks. It is a sports lovers fantasy, an obstacle racers average Saturday morning, and even your Grandmother's new bucket list item. Everyone is now being turned on to this new style, and oh it feels so good.

On April 14th, Gladiator launched the 1st annual Angel's Stadium Rock n' Run and announced their new partnership with Epic Series. While many were unsure how this news would change the initial image of Gladiator, I felt that it was the perfect fit, and the new branded duo was a pleasant surprise. Epic Series separates itself in the obstacle racing industry as non-gimmicky, no-nonsense, mud-free fitness challenge targeted for those who prioritize strength over endurance. Gladiator has always been a mud-tastic explosion of fun, silly obstacles, and encouragement. At first glance, the two companies couldn't be more conflicting, but together they seem to accomplish a fun for the whole family event filled with challenge, obstacle mayhem, and a mild taste of muddiness.

Previously, my predictions for the Gladiator/Epic merger were partly cloudy with a side of dread. I was worried it would be to obstacle dense, to obstructed and that it would allow only limited amounts of running. Thankfully I was wrong, as the course layout was well rounded and carefully designed. It felt equal in strength, diversity, and endurance, which is the ideal blend when targeting the average OCR enthusiast. There was only a brief stint of stair climbs, a sizable portion of ramp inclines, and an appropriate amount of incline free running, which made the race comfortable, yet still challenging. Standardized obstacles were included, such as a rope climb, monkey bars, and 8-foot walls, in addition, a few bodyweight exercises were thrown into the mix, and Gladiator introduced an Archery challenge, a keg carry, weighted jump ropes, a balance beam, and a barbed wire mud crawl. My overall opinion of the course is that is was pleasant, adaptable to any levels of fitness, and something the whole family could enjoy. I would definitely come back and encourage others to do the same. 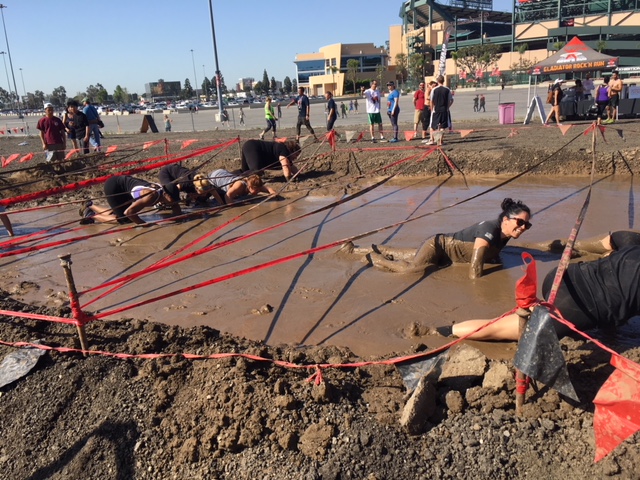 The final obstacle, a mud crawl to the finish line. No clean finishers here!

After crossing the finish line covered in filth, sweat and mud boogers, participants gravitated towards the Dr. Bronner's Foam Truck in an attempt to hose our dirty selves down. For those who are new to the scene, the Dr. Bronner's Foam Experience is essentially a group shower disguised as a dance party where you are continuously encouraged to “save water and shower with a friend.” It's a hell of a good time and the perfect setting to chat it up with like-minded strangers and newfound friends. In addition to the Bronner's team, there were a few additional vendors and food trucks; such as Rx Bar, who were offering free deluxe protein bars to all participants, and the race coordinators prepared a push-up contest and other fun games.

Dr. Bronner's All in One Magic Foam Experience

While I spent the day enjoying myself on the course and inside the festival, I admit I was a little disappointed with the awards ceremony.  There seemed to be no official podium placement, nor any available photographers to capture the moment, and it felt unnecessarily rushed. While even though the majority of participants were not racing for a shot at the gold, I personally feel that without proper recognition of the top tier athletes, the growth of this sport could diminish and lose value.  However, with that being said, Gladiator Race displayed an eager enthusiasm to keep our spirits high and issued apologies to those who missed their awards.

Furthermore, after the ceremony ended, I took the opportunity to chat with a few of the top finishers, such as 2nd Place Elite Female, Kelly Druce and Wesley Kerr, the 3rd Place Elite Male. They graced me with a quick interview and additional thoughts on racing. 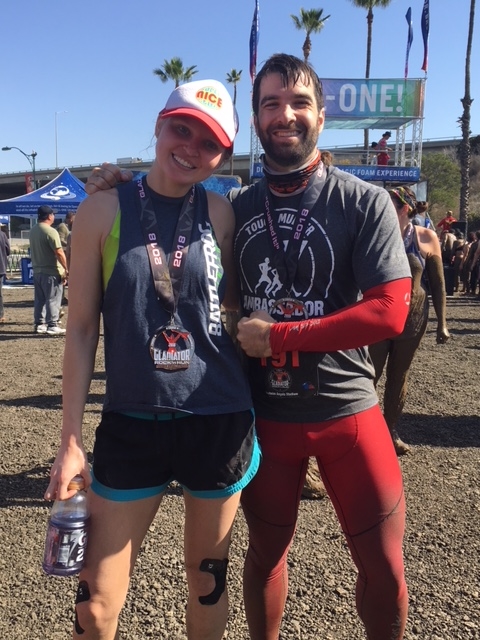 “Anybody can complete a race. You might not keep up with the elites but for most of us, that's not what its about. Just get out there, run if you can, walk when you have to and do your best on the obstacles,” revealed Druce.

She disclosed further that she has only been racing for a few years and decided to sign up for her first race back in 2015, even in spite of having no involvement in strength training whatsoever. Wesley Kerr, an endurance athlete, and World's Toughest Mudder veteran also chimed in with an agreement and stated that anyone has the ability to conquer a course regardless of what shape, size or physical assets they may possess.

“I think people get scared of obstacle races, but if they’re able to run a 5k in training, they’ll be able to do a 5k mud run. It might be hard and take some time, but as long as you’ve got friends smiling next to you, it’ll make you stronger and healthier.”

So there you have it, from the top athletes themselves, encouraging both newcomers and seasoned athletes to join in and pursue a healthy challenge.

In summary, I felt that Gladiator did a superior job of putting together a challenging, yet enjoyable course. It delivered a higher percentage of obstacles per mile than originally promised and conveyed enough diversity and obstacle depth to keep us stimulated and satisfied. Furthermore, Gladiator engages with like-minded businesses and sponsors, which helped make the finisher festival lively and entertaining.

Have you done an Gladiator Rock n Run?

Leave your own Gladiator Rock n Run review and feedback...

About the Author: Kya Michelle

Kya Michelle made headlines in the OCR community after losing 130 lbs and completing World's Toughest Mudder in 2014. She is an avid marathoner, ultra marathoner, trail runner, Spartan junkie, Tough Mudder enthusiast and health coach. In her free time she enjoys hiking, cliff jumping, traveling the world and writing for Mud Run Guide.