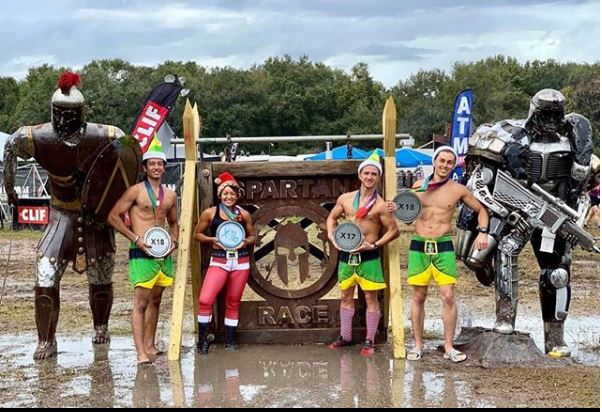 Spartan Race had a very busy weekend with the Championships in Iceland, a race in Los Angeles, and a race in Central Florida. There was a lot going on and a lot of people chasing their final Trifectas of the year. I had the pleasure of running both days in Central Florida and drew a lot of comparisons from both days. This recap focuses on the Sprint from Sunday but draws a lot from the Beast the day before for comparison. Sunday ended up being a fun and muddy mess of a course that everyone seemed to enjoy. The venue was further away from Orlando than I thought, but the drive to and from gave plenty of time to reflect. Spartan Race has always put on great events and Central Florida was just another example of that. 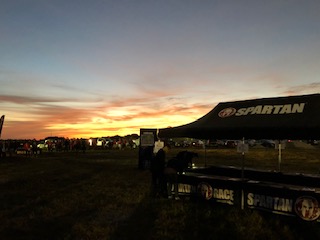 Spartans from across the country descended on Mulberry, Florida for one of the final big weeks of the racing season. Saturday was a beautiful winter's day in Florida. Aside from the traffic, parking debacles, and the long lines everywhere, it was a great day for a Beast. The weather for the Sprint on Sunday could not have been more different. A cold front moved into the area and brought with it rain and storms. At one point, they even pulled the course and took all volunteers from their station. The already wet course became a swampy, muddy mess. Everyone seemed to love it as it was a respite from the beating sun the day before. Parking still proved to be an issue with only one entrance for a single lane road. Some racers reported 45+ minutes in line before they could get into a parking spot and then another 20+ minutes waiting at registration. The venue was very flat and made for great racing, but the location made parking difficult and left a sour taste for some racers before they even got to the start line.

The course had almost no elevation change what so ever and was flat and fast. However, then the rain came and became the great equalizer. The small ravines that were barely knee high the day before were now almost waist deep and the barbed wire crawl through mounds of dirt became a giant mud pit. A few interesting quirks of the course this weekend: The Twister was only 2 sections long and was much easier than it has been at other courses, the Spear Throw was on an incline and racers had trouble adjusting, and the final Barbed Wire Crawl had giant mounds of dirt throughout making it impossible to roll. The course was very wet and crowded. There was a line at almost every obstacle when I got there, but people were enjoying their time and helping one another during the open heats. 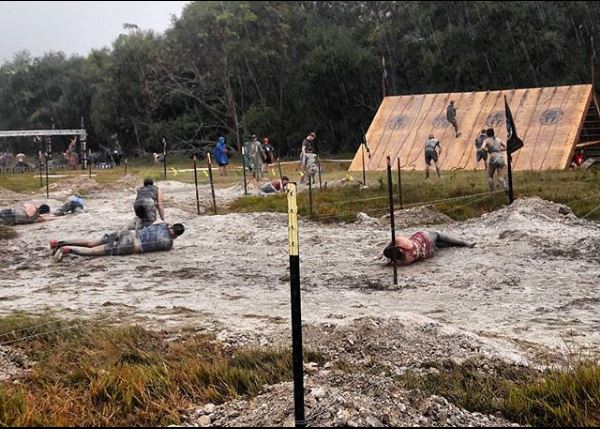 From a beautiful, sunny, and 75 degree day for the Beast on Saturday, to a rain soaked and delayed Sunday Sprint, the weather played a big role this weekend.  There were many racers who came bundled up on Sunday due to the cold front that came in. Many of those who lived in southern Florida were not used to such low temperatures early in the day. Rain flooded several parts of the course as well as the festival area. It was impossible to get clean after your race as you were just walking through the mud to get back to your car. I have been running courses in the desert region of the country, so the rain and mud was a nice change for me. Most runners took it in stride and made the best of the weather, so they could finish chasing their Trifectas. 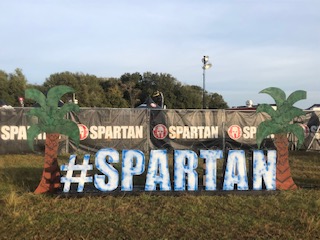 This was the last Beast Weekend in the United States for the season and there were a lot of people chasing their Trifectas. There were several 10x and higher medals walking around the festival area after the race. I finished my heat and then stood in line for almost 30 minutes to pick up my 4x medal. It was a major accomplishment and a lot of people felt the same way. Racers were posing with their medals all over the festival area and the course. Many used the #Spartan sign as well as the statues they had posted out front. It was amazing to see so many people reaching their goals and celebrating their achievements. Spartan even ran out of some medals and a set of racers created a x16 medal for their friend out of paper. The course medals were standard variety and did not have anything special to them. It was a great way to close the season for racers with two great and totally different days from Saturday to Sunday.

After running through the mountains in Colorado and the sand in Nevada and Arizona, the race in Central Florida was a great change. The weather was amazing on both days but for separate reasons. The sun shining and the humidity had moved out for the Beast on Saturday, and then Sunday's muddy mess of a Sprint course created a large adult playground for everyone to close their season. The parking and lines were the biggest obstacles on the day, but that had more to do with the high rate of participation than anything else. Both days were close to selling out and that makes for a crowded course. This was my 12th race of the season and would score a 4.1 out of 5. The overall course was great, and the lack of elevation made it even better. However, the parking and long lines took away from some of the race experience as well as Spartan running out of some of their Trifecta medals. This is a great course to end the season and I would highly recommend it to anyone next year.