Spartan Race ran their second course near Las Vegas for 2018 and athletes from all over the country took on a sunbeaten course full of sand, constant wind storms, and about as much water as you would expect from a desert course. However, something felt different about this Saturday. This was one of the few times they ran the Sprint course on Saturday and the Super on Sunday, but that was not the reason.

Spartan was unveiling their first ever Para Athlete heat. 8 teams of 4 athletes and 1 team of 2 competed for a prize of $10,000. There were special rules in place with mandatory obstacle completion, a wrist band system for failed obstacles, burpees could be shared by teammates, teams had to remain within arms distance of one another, and at least one participant had to complete all non-burpee obstacles. An extra group of Para Heat Officials were brought in to oversee key obstacles, and the athletes were given their own start time just before the Open Heats began.

Teams have participated in different races across the world individually, but this was the first time they were given their own heat and competition. The event was put together entirely by Rick Kolberg, Jonathan Lopez, Erica Walker, and Niki Verneuille. It was an amazing effort by the Oscar Mike organization and Spartan Adaptive Athlete liaison Erica Walker.

There were originally 40 athletes scheduled to compete, but different rules and travel limitations cut the field to 34 athletes. There were 8 teams of 4 competing for the prize and another team of 2 going through the course for pride after their other teammates dropped out without enough time to find replacements.

The teams included team Some Assembly Required, Wheels and the Leg Men, Shadow Blades, ATF Team 1, ATF Team 2, Handicapable Fitness, Black Sheep, Synergy Prosthetics, and Spartan USA. There was a wide variety of athletes with varying disabilities. Some were wheelchair bound, others fully ambulatory, but everyone had the same goal in mind.

Teams were competing not only for the $10,000 prize, but also to show everyone else on the course what they were capable of. These athletes surpassed all expectations and all but 1 athlete crossed the finish line in the allotted time. Every team found their individual strengths and worked together to complete the course. There were amazing feats of physical strength and mental fortitude displayed over the course by every athlete involved. 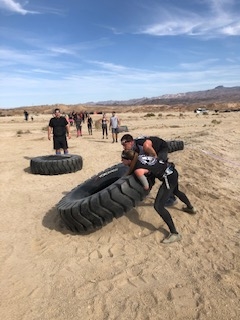 Spartan put together an amazing desert-based course about an hour and a half south of Las Vegas. It was a relatively flat course with no natural water obstacles. It was a short course compared to many other across the country this season, but that had nothing to do with the Para Heat. Athletes had to traverse every wall, crawl under every barbed wire, and navigate the tire flip, spear throw, and multi rig just like athletes in other heats. There were no special adaptations to obstacles for the para athletes, and that is just the way they wanted it. Some of the highlights include the slip wall for Some Assembly Required, several athletes hitting the spear throw, and the fire jump at the end for every team. Aerial coverage was provided by ESPN and there will be a showing of the entire race in early January.

This writer had the honor of running alongside Team Some Assembly Required and got a firsthand look at their strategy for taking down the course in record time. They ran in formation the entire race and used a run/walk interval system to keep themselves moving and accountable. They ran in a 2:1 interval and rarely broke rhythm unless someone was experiencing pain or a cramp. They knew which obstacles were coming and what they expected to complete. Every racer had to attempt each obstacle, but they knew what each person’s strength was and attacked each obstacle accordingly.

Team Handicapable Fitness was comprised of ambulatory athletes and they made sure their pace was fast enough to overcome any sets of burpees they hit along the way. The ideal team knows their strengths and weaknesses, moves as a unit, and makes sure everyone knows what their role is.

In recent years, Spartan has added all sorts of series and different style events. With the U.S National Series, Honor Series, Mountain Series, Stadium Events, and other new idea happening every year, this event went well enough that they are considering expansion. Owner Joe De Sena was at the finish and said a few words before the awards were handed out. He expressed a desire to continue the series and expand it over the coming years. This is something that Spartan will only be able to do through the tireless efforts of Team OscarMike and others. There were talks of expanding the heat to multiple venues and creating a full series and overall champion or bringing it back again next year bigger and better with more teams and more prize money. It was an amazing even that paired very well with the Kids World Championships at the same venue. Laughlin was a small venue, but a great kick off point for what is hopefully the next big thing for Spartan.

Look for ESPN to air the full version of the Para Heat in January. If you want to know more about the different athletes and teams, follow the Warrior Wednesday series at staging.mudrunguide.com. If you want more information on the driving force behind the full even check out www.oscarmike.org. OscarMike is a nonprofit organization that gets our nation’s wounded veterans on the move again. See Mudrunguide’s full write up at https://staging.mudrunguide.com/2018/05/warrior-wednesday-the-oscarmike-foundation/