It had been almost two years to the day, since I had run the Rugged Maniac course here at the Castaic Lake Recreational Area, just North of Los Angeles. This is one of two stops for the race company in the Southern California area, the other being Temecula, north of San Diego. I would definitely say that Castaic is the more challenging of the two, though still enjoyable, with some formidable hills even on the short 5K course. Though I was looking forward to the course itself, I was most excited about experiencing first hand the new obstacles that Rugged Maniac was debuting for 2019. For the past few years, I've thought of Rugged Maniac as a race that, while fun and a good start for beginners, didn't have much to offer for more experienced OCR athletes. I was hoping this year that might change. 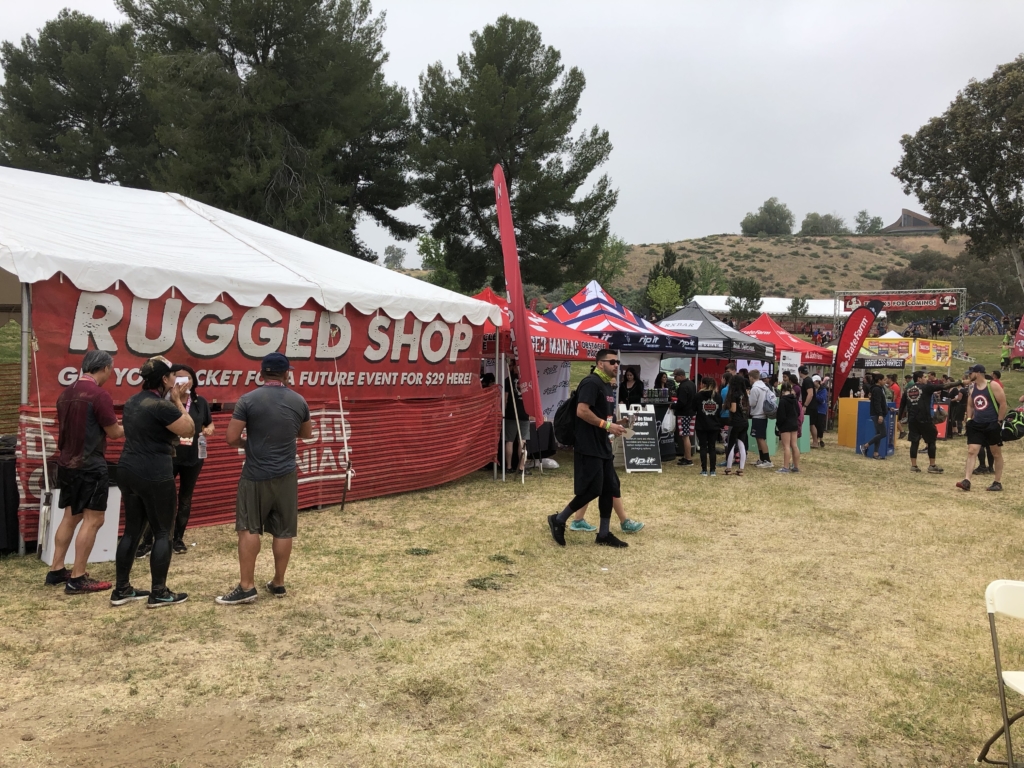 I arrived early, even before the check-in process had begun. It gave me a chance to take in the layout of the festival area, and take a look at what I could look forward to after the race. Castaic is a relatively small area, so the different facets of the festival area are relatively close together. That said, I think they did a good job of setting up shop. The check-in tent was the first stop at the top of the hill, coming from the parking area. Walking down the hill, there were merchandise and vendor tents on the right, and the beer garden (and a large one, at that) on the left. 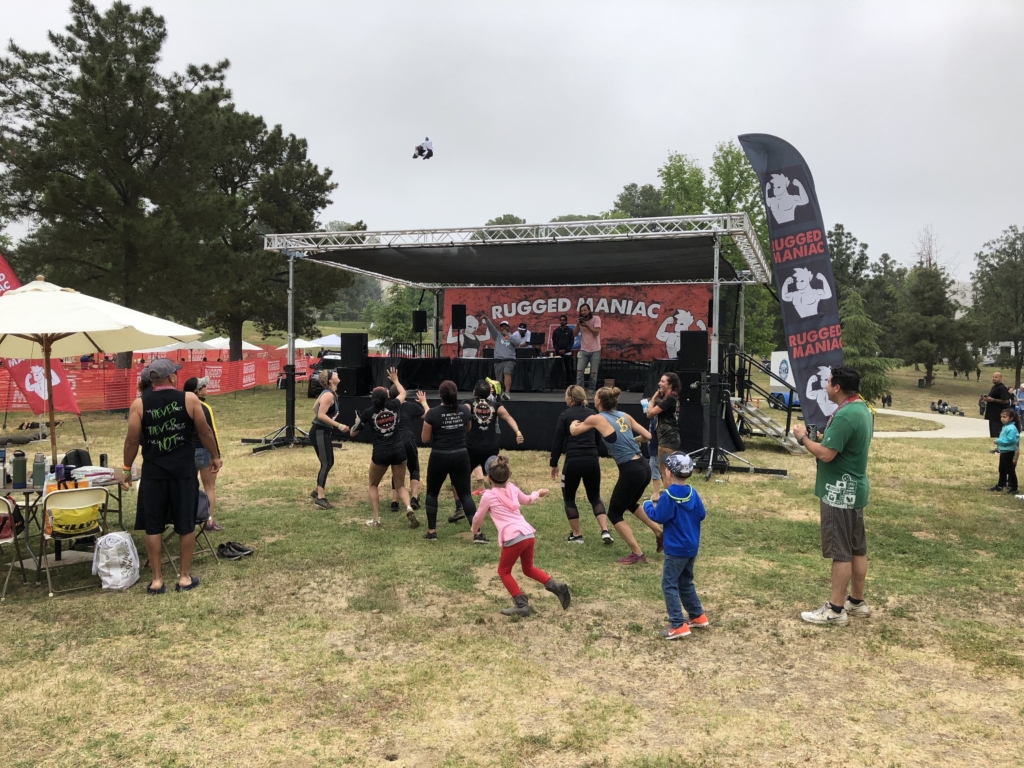 They also had some decent food trucks stationed just above the beer garden, which seemed well thought out. The main stage was at the foot of the hill, just before the start corral and finish line, which were both conveniently located next to each other. Though Rugged is on the smaller side, when it comes to race series, they most definitely boast some impressive swag. This year's finisher tech tees were definitely a step up from the previous all-cotton shirts, and, upon crossing the finish line, racers were greeted with a simple, but effective, 2019 medal, and all the bananas, orange slices, and cold water they could eat and drink. If you were still hungry or thirsty for more, you needed only to pass by the vendor tents.

As previously mentioned, the course at Castaic is a fun one. It starts with a short, flat run to get the legs going, then gently rises up towards the hills, crossing a large grass area before becoming an all-dirt trail. Since this was just a short, 5K course, there were not as many opportunities to climb, as in, say, a longer 5 or 6-mile course, but the course designers still found ways to make it interesting. There were a few shorter uphill sprints, along with one or two long uphill climbs that left many pausing to catch their breath at the top. The remainder of the course was relatively flat, with a few pleasantly winding, and gently sloped downhill sections. Overall, I'd say the course was definitely doable for the novice, even first-time competitor, but still had enough to make it interesting and somewhat challenging for those who wanted to push themselves and run against the clock. 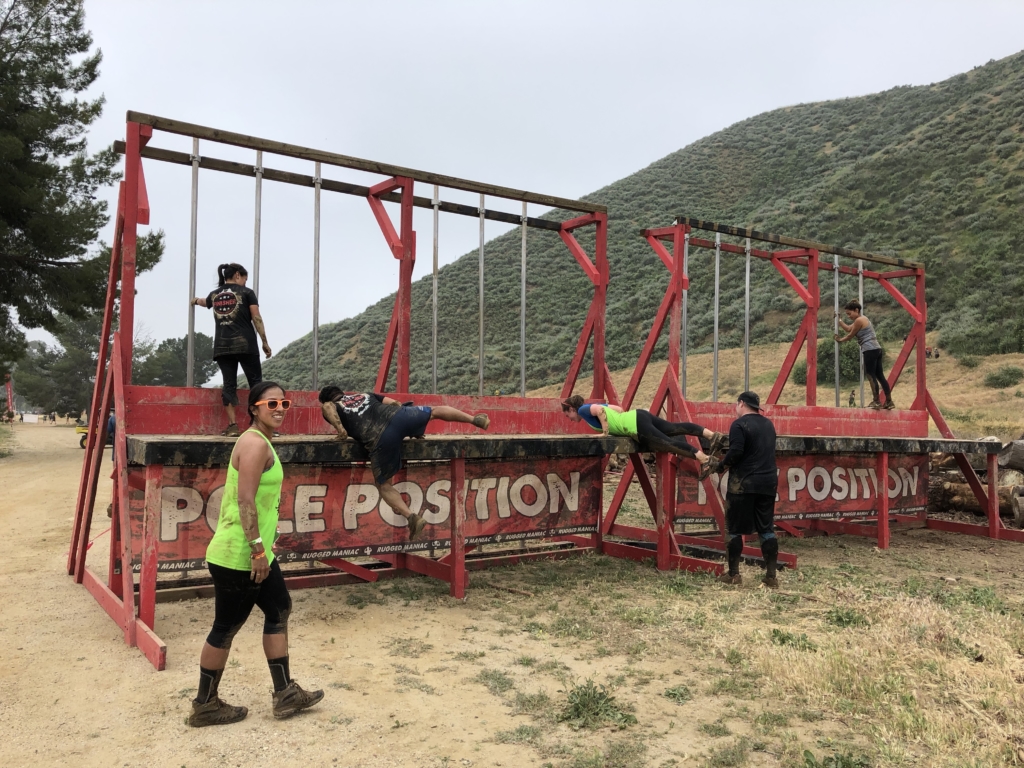 Though there are a few fun obstacles that have been a staple of the Rugged Maniac races for a while now (think the Warped Wall, Mount Maniac, Anti-Gravity, and, of course, Accelerator), I was most looking forward to seeing what they had to offer new for this year. I'm happy to say, they didn't disappoint. Yes, the giant inflatable obstacles (i.e. Feed the Beast) are still a part of the course, much to the chagrin of some, but it does seem like Rugged is making an effort to up their obstacle game, in hopes of attracting some of the more experienced OCR athletes. Off the Rails was the first ‘new' obstacle I came across on the course. Apparently, it was part of the course last year, but, being absent from last year's race at this venue, this was my first time seeing it. Spoiler alert: This was my favorite obstacle of the day. Basically, the idea is to get a running start, grab a short rope, and slide all the way to the end, then ring the bell. The best (or worst) part? Even if you make it all the way and smack that bell, you still fall in the water. Brilliant. With the right amount of speed it was relatively easy, though as I stood at the obstacle and observed others attempting it, it was obvious that the challenge for most was simply getting enough momentum to carry them all the way to the end. Truth be told, whether they hit the bell or not, almost everyone seemed to really enjoy this one. 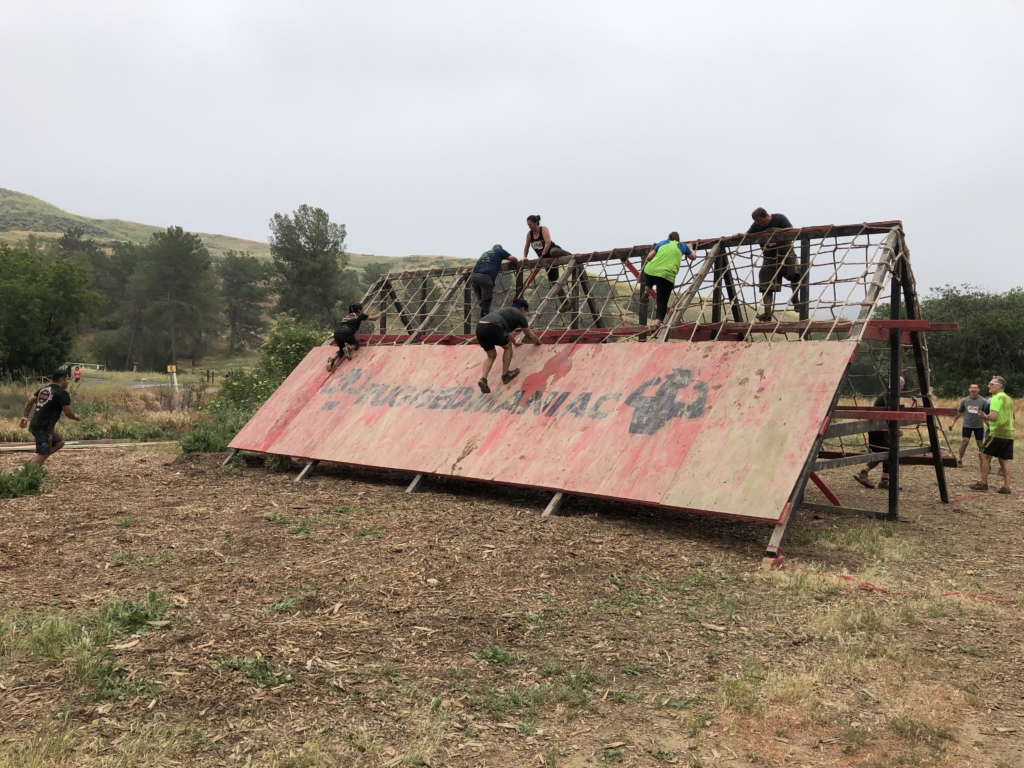 After a few more of the ‘traditional' Rugged obstacles, we came to what was, in my opinion, the most challenging of the new obstacles: Barzan. The name of the game here was definitely grip strength. Built over a pit of water (duh), competitors had to first navigate a slanted bar, then a parallel bar, followed by swinging monkey bars (think Ape Hanger), and finally back down a slant bar, to get to the other side of the pool. Needless to say, those with less than stellar grip strength found themselves clean, but wet. A few obstacles later we encountered Full Tilt, which was a twist on the common monkey bars. Though the bars started out flat, once you got past the midway point, the ladder angled downward with your weight, causing one to have to shift their balance slightly. Though this was far easier than Barzan, my only complaint was that this obstacle was not over water, but grass, which seemed somewhat anticlimactic. Without the threat of dropping into a cold or muddy pool of water, there seemed no real consequence for obstacle failure.

Two things stood out for me regarding this race. One: This is just a fun time. The vibe at Rugged maniac events always seems positive. There's a great mix of new and more experienced athletes, but everyone seems to make having a good time their priority. The festival area was pumping, and people seemed to want to stick around and enjoy the good company (OK, and the beer). Second, I was pleasantly surprised at the effort the folks at Rugged Maniac seemed to be making to create slightly more challenging obstacles. Obviously, if ALL their obstacles were that challenging, they would probably lose their original fan base, but it was nice to feel like they were finally acknowledging those who craved a bit more of a challenge. So, I'd say, if you're looking to experience an OCR event for the first time, you can't go wrong with this one. If you're training for something bigger, and Rugged Maniac rolls through your town, put it on your list. You won't regret it. And if you're one of those who seems to only enjoy those events that truly challenge your ability, who knows? You may still find yourself enjoying a lap (or two) of the next Rugged Maniac event.

Have you done an Rugged Maniac?

Leave your own Rugged Maniac review and feedback...

This author is part of the Mud Run Crew and received a free race entry in return for an independent review. All opinions are those of the author and were not influenced by the race sponsor or Mud Run Guide.
By Daniel_Ludwig|2019-05-02T09:48:02-04:00May 8th, 2019|Race Recap, Uncategorized|1 Comment