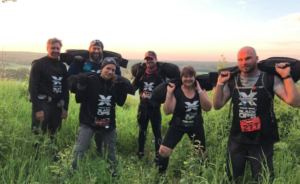 The summer solstice is a time of celebration for many people around the world. Athletes in Northern Alberta partied by taking to the trails for a twelve-hour evening obstacle course race at The Boneyard Compound. Following in the footsteps of 2018's inaugural challenge, participants were tasked with completing as many 8 kilometer loops featuring 26 obstacles as possible.

Although this was an obstacle race, the first 45 minutes of the event were obstacle free which gave racers a chance to get in some early mileage before the real fun began. In order to be considered an official finisher, racers were required to complete their final lap between the 11th and 12th hour.

Racers began to populate tent city at 2:00 pm, about 7 hours before the race actually began. The race briefing that took place the day prior indicated it would begin sometime between 8:00 and 10:00 pm, 30 minutes after the warning siren sounded. Prior to the pre-race meal, racers would socialize around the pit area and talk strategy for the night. The excitement of the athletes quickly shifted from happiness to nervousness as the starting gun time drew near. Appropriately at 8:41, the siren used in the movie The Purge gave racers their half-hour warning.

200+ racers bolted out of the starting corral in an effort to get through their first lap without having to do any obstacles. In that group were the “sandbaggers”, a division of racer completing the entire twelve hours with a 40-pound sandbag on their backs. Throughout the night, racers and spectators could be heard cheering that division on as loud as they could because doing a half-day race without extra weight is challenging enough for most.

Spirits were high throughout the evening hours, even when the rain came down. The majority of obstacles were stationed around the pit area so there were plenty of spectators and crew to encourage competitors every time they came through. Although energy levels could be seen to lower during the darkest hours, enthusiasm spiked once the sunrise started around 5:15 in the morning. Smiles returned to the faces of racers, crew, and volunteers as people completed their final laps before ending their night.

While the race was happening throughout the Boneyard Compound, there was plenty of action happening around the pits. Crew for racers worked tirelessly through the night to ensure that everything was ready to go when their competitor came in each lap. For many, bringing crew was the difference between running all night and taking long breaks in their tent area and risking cramps and lowered desire to return to the course. Fortunately, the organizers opened a mess tent where crew could access hot water and a microwave which proved invaluable as the night drew on.

A special shout out needs to go out to the volunteers of this event. As a racer, I saw the same faces at all obstacles throughout the night boosting participant morale while never showing signs of fatigue. They were all very welcoming faces each lap and should be commended for their hard work all night long.

The first two or three kilometers saw few obstacles which served as a rest period for racer's grip as the night went on. Although this course saw its share of climbing, the vast majority of the course was very runner friendly with only 250 meters of elevation per lap.

To start, runners were shot into an open field where they quickly merged into winding single track which had its share of muddy terrain and rolling hills. The topography was not very challenging until racers entered the obstacle section. Once there, racers would complete an obstacle, run up and down slick hills, and then repeat until they completed everything in their path. The slippery hillsides made for much more challenging obstacles as it was commonplace to get one’s hands muddied prior to completing a grip based challenge like a rig or tire flip.

After experimenting with a new penalty lap system in 2018, X Warrior elected to use the system that was used at their event two weeks prior instead. Racers wore a white wristband that was marked with an “x” every time an obstacle was not completed. The number of “x’s” corresponded with how many penalty loop checkpoints they were required to complete, maxing out at 4. If someone failed 4 or more obstacles, they were required to complete about 1 kilometer of extra trail running after finishing the course and prior to returning to the pits. These penalties were done at the very end of the course rather than at each obstacle.

To quote X Warrior Challenge owner Darcy Chalifoux, “This race is brought to you by the letter ‘G'”. In case you were wondering, “G” stands for grip. Together with course designer Rob Day, the event ensured racers were inundated with a gauntlet of forearm burning obstacles throughout the night. When racers were not hanging off something, they were carrying heavy pipe or “pro-pain” tanks filled to the brim with sand.

The course featured four heavy carry obstacles, countless hurdles and walls, three rigs (including a new slant rig and a low rig), a peg-board, monkey bars, massive tire flips and a new funnel wall obstacle. The slant rig involved traversing a series of backward leaning pipes that included very few footholds. The new funnel obstacle was closed down early in the race due to slippery conditions but was very challenging even for the most experienced of racer. Racers had to climb an incline wall which was about 10-12 feet high, come down the back side then immediately go up the opposite way on another incline wall. Competitors had to do two of these obstacles back to back.

Although there were not many new obstacles and the focus was on grip strength, there was a good balance achieved that allowed people to vary the type of grip strength they utilized. So even though you were doing many obstacles back to back, it never felt like it was an overload. As previously mentioned, the running sections were a welcomed break from the obstacles.

Overall, Black Ops did a very nice job of pushing racers to their limits while giving them a course that most skill levels were able to enjoy. Having a longer course and a heavy focus on grip strength forced people to change their strategies quickly. It fills a relatively untapped segment of the OCR market in Canada that is looking for that “next level” while not stepping into the world of selection events.

This author is part of the Mud Run Crew and received a free race entry in return for an independent review. All opinions are those of the author and were not influenced by the race sponsor or Mud Run Guide.
By Aaron Singleton|2019-06-30T23:04:35+00:00July 2nd, 2019|Race Recap|0 Comments

About the Author: Aaron Singleton