On Saturday, May 1, 2021, Midwest OCR staple Highlander Assault hosted their second annual night race. Similar to the first year, bagpipes rang out as racers in their headlamps took off through the woods, facing a variety of terrain and obstacles. The endurance heat started at 7:00 pm. They had until midnight to complete as many laps as possible. Open waves started at 7:30. All of the open wavers were finished by 10:30, so we gathered to watch the grand finale: the elite heat. Many of the racers (myself included) camped on the grounds overnight, enjoying fellowship around the campfire long after the race was complete and the awards were handed out. 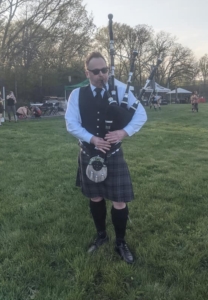 Many a kilt could be seen this weekend at the off road park in Holiday Hills, Illinois. It is located in the country about an hour drive north of Chicago. Thankfully, parking was a short walk from the festival area. There was an open field between the festival and the starting corral, giving racers plenty of space to warm up and stretch. We ran around serene ponds, scenic fields, dirt tracks, paved roads, and ended in the eerie woods. The trails were lit with glow sticks, and most of the obstacles had overhead lighting.

The rig by Race Ready Obstacles

The obstacles were well dispersed throughout the race. If you are seeking to conquer a fear of heights, try the Siege Wall, the Gates of Saint Michael, or the Towers. A new slippery balance obstacle, the Moat, made an appearance. For accuracy, show off your archery skills with the Long Bow. Additionally, In the strength category there were atlas stones, a sled pull, and my personal favorite, Scotty's Hammers, which look like cement lollipops that you drag by a wooden handle. The toughest obstacle to complete was the rig devised by Race Ready Obstacles, which included a t-bar, ropes, a cannonball, an anchor, and a nunchuck right before the bell. At the end of the course racers flew up the Invasion Wall then crawled through Fog of War surrounded by smoke from a fog machine.

I'm looking forward to the fifth year of Highlander Assault's day race, which will take place August 7, 2021. They offer options for 4 miles, 8 miles, and 12 miles. If you are looking for a real opportunity to push yourself, run the 26.2 mile King Arthur Challenge, which includes the entire 12 mile race twice plus extra obstacles. Register or find more info at their website.

Have you done an Highlander Assault?

Leave your own Highlander Assault review and feedback...

About the Author: Danielle Hoffman

Danielle is a mom of 4 who loves running in the open waves at every OCR she can find. She's also the host of the Fit(ish) Mom Podcast at anchor.fm/daniraehoff