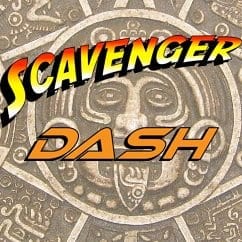 
Scavenger Races are all about fun, and 95% of the participants are here for exactly that. Some actually sign up thinking it's a bar crawl – which it's not – but the fact that it often starts and finishes in a bar lends to that understanding.

Scavenger Dash was launched in 2009 by Rick Eastman, the founder of Sierra Adventure Sports who also put on the Mad Mud Run

In the early 2000's, Rick signed up and participated in a now-defunct race called Urban Challenge which was essentially billed as an adventure race in a city. The adventure intrigued him enough that he began putting on adventure races of his own in 2003, launched Mad Mud Run in 2007, and he turned his attention to creating a similar type of “scavenger-hunt race” of his own – and Scavenger Dash was born.

Scavenger Dash made it's 5 city tour debut in Omaha, NE and was a hit; in the following two years we expanded to approximately twenty five cities across the US. As evidenced the exponential growth of obstacle races and mud runs, it was becoming increasingly obvious that people wanted to participate in more than just a typical 5k, they wanted adventure, mental challenges and puzzle-solving mixed in with their exercise.

At the beginning of the race, each two-person team is given an envelope that contains twelve clues they need to solve. This clue sheet also serves as their passport; complete the clues, then venture to the checkpoints indicated by each of the answers, and follow the instructions they will find there.

At some points teams complete a challenge, at others take a picture, and some receive a stamp for on their passport. All challenges are completable by nearly anyone and teams also have the option of skipping one of the twelve clues – strategy will play a big role in which to skip. Teams may also have a mandatory clue, which will be indicated on the clue sheet.

Teams have many ways to solve clues: Asking strangers, the library, a smartphone, they can even carry a laptop – if one of the teammates does not mind hauling it around. The most important resource a team can have is a great “Pit Crew” as your phone-a-friend. Calling someone at home who has web access can make a huge difference in solving clues.

Races may contain one or more Detours, which is a choice between two challenges. Teams can choose the one they think will be fastest – or the most fun.

One big advantage that many teams fail to overlook is forming alliances. Just like on the TV show Survivor, teams may form alliances with other teams, if only to solve the clues. The faster teams are able solve the clues, the faster they can complete the course.

PLEASE NOTE: It appears this event currently is not in operation. Luckily, Mud Run Guide has hundreds of exciting events in your area, and many are coming up soon! If you have any questions, please contact the event directly from their website link. If you are the owner of this event and you would like to re-enable your listing, please contact us at mail@mudrunguide.com

Click an event name to view the event details. Scroll past this, or click here to see the review section
Browse our calendar of upcoming mud runs mud races & obstacle races for Scavenger Dash

Scavenger Dash Reviews from the Community

Average rating: 4 / 5 from 1 reviews.
(Scroll up to see a list of upcoming events for Scavenger Dash)

The Scavenger Dash rolled into Boston recently and we decided to give it a shot. Since we have completed various scavenger hunts throughout the city last year, we were feeling confident about our chances. Being promoted as a wildly fun urban adventure, Scavenger Dash involves teams of two solving clues, scavenging items, taking photos and completing fun challenges. Two person teams are given a sheet of twelve clues. Upon solving 11 out of 12 of them, the teams head out to different checkpoints throughout the city. All teams are restricted to either traveling by foot or public transit only.

Unfortunately, the scavenger hunt was scheduled for April 20, 2013, which was only five days after the Boston Marathon terrorist attack. After discussing whether or not to even participate in the event, we eventually decided to do it. The morning started out rainy but cleared up in the early afternoon. We hopped on the subway and headed to Aquarium station. A short walk later, we arrived at the start/finish line located at Battery Park Bar & Lounge. We signed in, got our number and was given a crayon to be used during the hunt. We spent the next half hour sizing up the competition and strategizing until we were summoned out front for the start.

The race official had announced that a few teams had decided to transfer to future events and about half of the other teams had not shown up. I would estimate that there were between 10-15 teams remaining to compete. The official then read a clue to everyone that would direct us to the location of our clue sheet. Once the clue was read, we were given a minute to solve it and were sent on our way. We thought we knew the answer from a previous scavenger hunt but we were wrong! When we finally located the correct location, almost all the other teams had already received their clue sheets and were working on the answers. Since we were a few minutes behind, we knew we had to get moving. We spent about 15-20 minutes solving the clues and planning our attack. After formulating a route on our map, we were off and running!

The only public transportation we used was a subway trip from the waterfront area to the Boston Common. The rest of the time, we ran to the clues. I would estimate we ran between 5-8 miles total. The answers were spread throughout the city, including the Frog Pond at the Boston Common, a penguin statue at the Aquarium, a large mural near the waterfront and the Hard Rock Cafe at Faneuil Hall. We also had to return with a pair of chopsticks that we picked up at PF Changs while running through Chinatown. There were also two physical and mental challenges that had to be completed. The first one involved making an origami shirt out of a dollar bill. The other challenge was a bit trickier. We were blindfolded and instructed to work together to tie a bow around a tree. However, in order to accomplish this, we were only allowed to use one hand each. Miraculously, we were able to tie the bow in our first attempt. The final clue led us to the Christopher Columbus statue. We were instructed to use the crayon supplied to us at the beginning to make a rubbing on the back of the clue sheet of the last name of one of Columbus' captains.

Picture
Once we confirmed that we had completed all of the checkpoints, we raced back to the start. We returned in under two hours and were feeling confident. When we entered the bar, the official seemed surprised that we were back so quickly (obviously a good sign!) After reviewing our answers, we were told that we were the first team finished. We won!! We were given our Scavenger Dash T-shirts and dog tags for participating in the event. Also, for winning the scavenger hunt, we received free into a future event and an additional first place set of dog tags. We enjoyed a few beers to celebrate our victory and then headed home. It was a perfect Boston afternoon to spend racing through the city. The event was well organized and the clues were quite challenging. We will definitely be back to defend our title next year!

business 0.3
The Ultimate Mud Run, Obstacle Race and Adventure Race Guide , USA 4.0 4.0 1 1 The Scavenger Dash rolled into Boston recently and we decided to give it a shot. Since we have completed various scavenger hunts throughout the city last year, we were feeling conf